I am assuming a chip or battery issue. I do have the old battery style refillable cartridges. I have read several posts and just found out that the new Carts do not have batteries. I have ordered chips for the three cartridges above. Do you recommend that I switch out all of my battery cartridges for the new type?

yes. This you should do.

The new type of non-battery chips are much more reliable in the long run. They will not lose charge and are not limited by the potential/build-quality of a battery.

I would switch out your battery-based chips and put in the auto-resetters but keep the old chips as backup! Can never have too many chips says a chip replacement veteran

Batteries are a pain, as is having the battery chips reset accidentally when you remove the carts simply to agitate them, but not being able to do a manual reset is also a pain. In the past, Dana and Kelly have expressed the view that each had its advantages. I’m inclined to agree.

I agree as well. In the most ideal world we would have auto-resets that were able to also be manually reset. However, the internal specs for these two families are so wildly different I’m not sure it’s possible.

The new ones have a very complex relationship with the printer and printer-voltages, etc . . . .

Frankly I wish chips didn’t exist. (Back in the 9600 days you could turn off chip reading all-together.) — the second we find/build/invent a better solution this community will be the first to know.

For now I recommend getting an extra set of chips to use as backup.

Now, about the issue of performing an initial fill to either flush if chasing the old ink with piezoflush, then initial fill with piezography ink. If you have autoreset chips, the level existing in the chip may not be enough for an initial fill and cannot be reset. I could see this as a real isse for flush carts.

Solution, especially for the flush carts Walker? Are there auto reset chips with the ability to manually reset? (like the 1430 carts?)

You should NEVER put piezography ink in a cart that has had Piezoflush! (I made this mistake a while ago myself at a lab when I was broke. Not good idea.)

That said, the init-fill procedure will take the ink levels down in the chips about .01 seconds before the clean procedure starts. They should not reset during it.

But my question is this:
If I have a set of piezoflush carts to store my printer, and I flush out the lines and head with an inial fill procedure, so far so good. Then, I put my ink carts in (a different set of carts of course), use my printer as usual. Then at a later date I want to put the piezoflush carts in again, except now, because I already did an initial fill, the chips don’t register enough and won’t do an initial fill.

There are other reasons to do an initial fill, for example, if you get air in the lines, or doing maintenance such as replacing dampers.

With regular ink carts, the solution to this is to have two sets of carts with the same ink. As one cart registers empty, fill it and set it aside until the other cart autoresets. Alternate carts this way so that you always have at least one full cart.

You would not be doing this with piezoflush carts.

You’ll need to run flush prints to reset a chip in this way.

This is a modified flush image that can be simply expanded and printed from Print-Tool in QTR Calibration mode. It prints 100% of all 8 channels of ink. (not Orange or Green at the moment. Will create a 10channel soon.)

Newer 2manuals software actually seems to reset low chips before the init-fill procedure . . . (at least on 9900 and 4900 in my experience) but every printer is different . . .

you can print this on cheap canon bond paper.

Now, sorry to be a pest…

If course, the R3000 has no power clean so if I had a really stubborn clog I’d have to resort to init fills. (I’ve heard that repeated clean cycles can overheat the head, and a clogged nozzle isn’t being cooled by flowing ink.)
So, if I do have such a stubborn clog and the first init fill doesn’t clear the clog, the only choice I’d have is to run your modified flush image. However, you have advised against using flush images for clogs. What would be my option then?

This is where you do need chips. It’s ideally a very small percentage of the time you would be in this situation Larry . . . . .

re: I recommend keeping small amount of Piezoflush or Piezoflush/Distilled in the carts if they have been used.

Thanks Walker. I sure hope I will never be in that position either!

As stated above, I have ordered 3 chips, one for each affected current refillable battery cart. What variety of chips will I be getting? If they are non battery, I assume that they will fit my current carts which currently have batteries.

They will be auto-reset. They will fit your current carts.

When I get the no battery chips, do I just install them on the carts that are partially full that the printer is not recognizing? This talk about an initial fill, is that the same suction method that we used for the battery carts that is being talked about?

The cart on the left is a battery-style chip, the cart on the right is an autoreset chip with no battery. The chip housing looks identical, but I did not try switching them. Hope this helps. 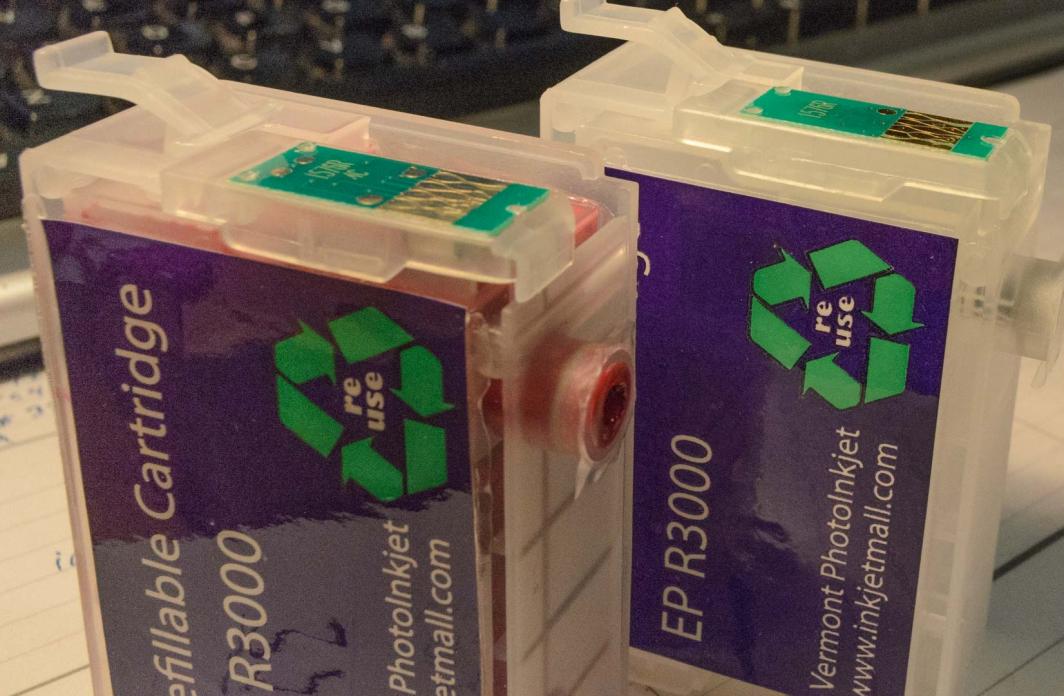 I believe that IJM sells chips that read “full”, so you will want to fill the carts otherwise they may empty before the chips tells you they’re empty.

Yes, you can replace the battery chips with the non-battery chips. I’ve done it a few times. No issues!