Unable to access test charts with i1 and Windows 8.1 for linearization

Perhaps I should add some of this to the blog. But first I’d like to know if the i1 V2 works with the old Measure Tool. It may not. I had cause to open MT tonight, and noticed that while the i1 is listed, there’s no separate listing for the i1 V2.

I redid the smear test with ALL inks from MK to #7, both from the carts and the bottles. All were shaken before taking the ink sample.

In all cases the inks from the carts were identical visually to the ones from the bottles.

From this somewhat unscientific visual assessment of the density changes between shades, it would seem that #3 and #5 are causing the problems, with #4 also a possibility.

Where to from here?

Thanks for the additional information. Your Piezography Neutral smear test should look similar to this (on matte paper): 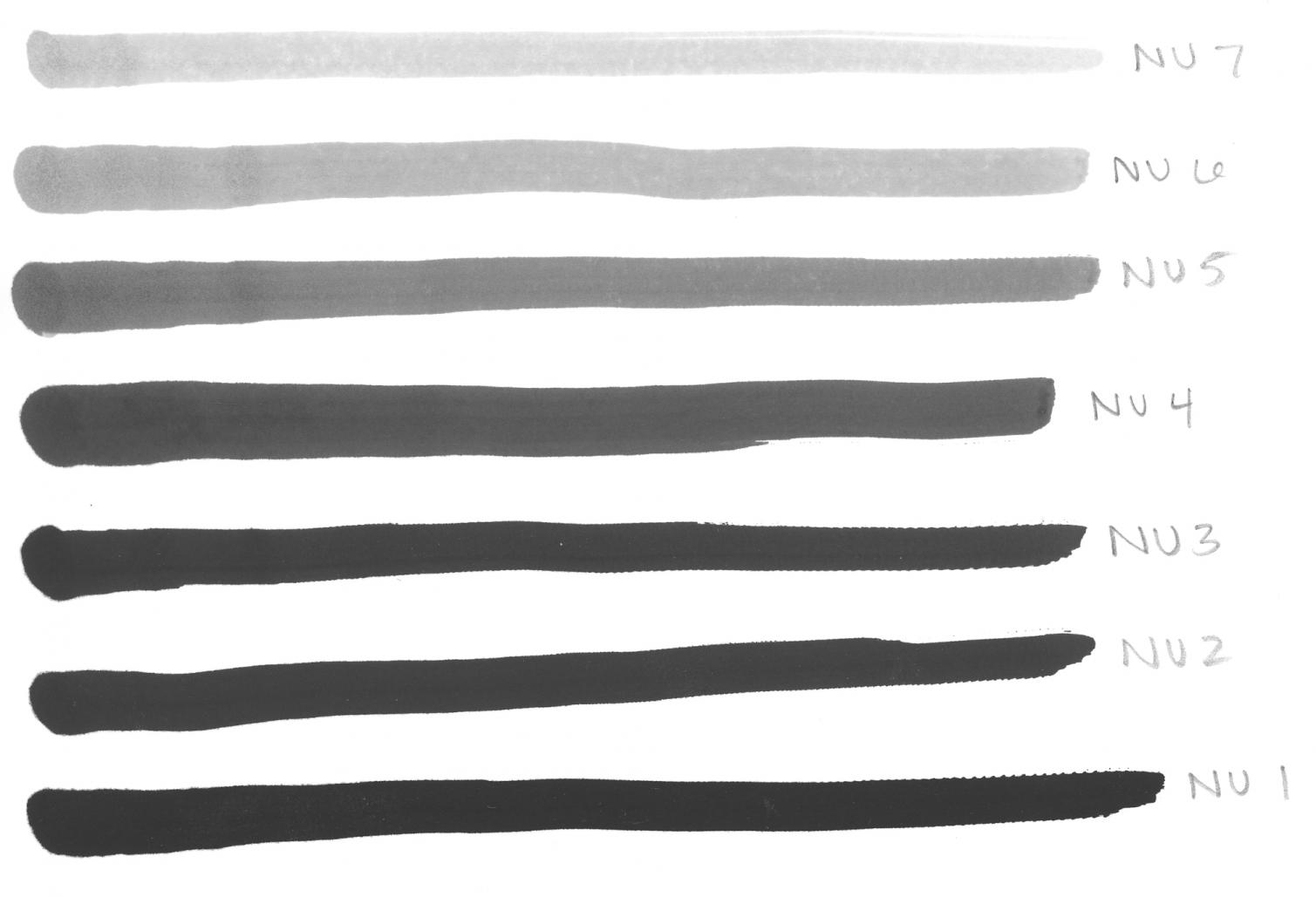 Thanks Dana,
It looks like shades 4 and 5 are the culprits.
I have decided to dump them and start again with fresh inks in new carts to avoid any chance of contamination from the dampers.

The old carts will be drained and used for Piezoflush.

Thanks Dana,
It looks like shades 4 and 5 are the culprits.
I have decided to dump them and start again with fresh inks in new carts to avoid any chance of contamination from the dampers.

The old carts will be drained and used for Piezoflush.

Any plans for a Canson Platine profile? The Jon Cone 2&5 are great, but just not available in Australia

Please let me know your results after installing fresh ink in your shades 4 + 5 positions.

Here is a curve for Canson Platine that we made for another customer, which may work well for your setup (once you get the current ink issue sorted out).

FWIW, I have found that Platine and IGFS are very, very close. I.e. a curve that is linear for IGFS will also be linear for Platine, or very nearly so. This works here for both K3 and Piezo. So if Dana’s curve for Platine doesn’t suit your printer and you have a good one for IGFS, you could try that.

Hi Dana and a belated Happy New Year! Thanks for the profile- and OOOPS!!! I found a profile under 3800-SEL-WN-CANplatFibRag which may or may not be different to the one you have kindly supplied. I will try both and do a linearisation test- initial print from the one I found on the site look O.K. but WOW this paper prints warm tone with the Neutral K7 inks.
I have put new inks into fresh cartridges to try and eliminate ANY chance of contamination ( yes, shaken first!) and even put them into a different printer ( a 3880 ) with an initial fill cycle and power clean ( both MK and PK channels ) to effectively start from scratch.
I will keep you up to speed on the results.

Any hints on a gloss paper available in Australia which will print a more neutral tone with the Neutral inks? Hahnemuehle Baryta FB or Hahn Fine Art Baryta perhaps? Over to you, Brian.

I don’t do a lot of gloss piezo printing, but in my limited experience it is the nature of the beast, i.e. gloss papers tend to be warm. A less warm gloss / baryta paper could be really hard to find if you want one without OBIs. I have no experience of the Hanh gloss papers. Another local user may chime in. Failing that, the Luminous Landscape printing forum often has discussions of such matters.

Hey Mike. Piezo inks are very unique in that they are actually intentionally built to be different hues based on surface chemistry of different papers. NK7 on one paper could be cool, neutral on a second (try Epson Exhibition Fiber first), split on another (ie: Canson BFK Rives), and very warm on a third (Platine). The ink is significantly more luminous and interacts in a much more complex way with the paper it is on. This is due to how fine and uniform the pigment particles are milled in the production process (much more than Epson) and part of the reason why Piezography inks have so much more visual (and literal) depth to them.

Epson inks are essentially opaque blobs of color and black that block all light from hitting a paper surface. Not as complex but also much more predictable in their interaction with X paper surface.

Piezography makes the process of printing digital very similar to darkroom, ie: choice of paper is very important vs an artificial toning “correction” applied to X paper by the ink. Choosing a digital paper that Piezography ink goes onto is similar in effect to choosing a silver paper/dev combination (neutral follows the law of relativity).

I would do this to get a full grasp of NK7 potential. Get Jon Cone Type 2 and Type5 (sample packs), and also a set of both Hahnemuhle M and Gloss samples + Canson samples. The Canson papers (in my testing) seem to be the most visually changeable with Piezography inks. This is probably due to the white pigment added to their emulsions as apposed to the optical brighteners found in other papers.

NK7 was originally developed to be dead neutral on Hahnemuhle Photo Rag 308 so that is the baseline.

edit> Canson Hahnemuhle and Epson samples packs should be available there. Just realized you are across the world from me.

Yep, thanks Brian and also Walker.
Coming from a wet darkroom background, and being somewhat obsessive, I am used to testing paper surfaces and tones with different brands and developers and toners and…and…
First thing for me to get on top of is the horrendous linearisation problem ( but I think I’m nearly there with that one ) and then standardise my gloss/matte and surface texture papers. I won’t even think about the different Piezo inks. Yet.

I agree that the end results ( when you nail them ) are pretty spectacular and I will have to keep trying.
I have already tried the Jon Cone Types 2 and 5 and like the neutrality of the Type 5 but as you point out, Walker, Australia is a long way from Vermont… check out exactly which part of Oz I am in- Albany Western Australia. Get there and you aren’t in Kansas anymore!
Now if the $AUS picks up a bit, I could go to a Vermont workshop later in the year. Pack a change of clothes, put the camera in carry on, should leave around 20-25kg for paper…

Interestingly, the profile Dana provided came up with "error, cannot open curve, permission denied " when I tried a 21 patch gray scale print from the QTR GUI but then it printed after a few seconds and but it looks WAY out compared to the IGFS or 3800 Sel-WN one I found.

Back to the testing…
Cheers.

The permission error is tricky to fix. It happens when QuadtoneRIP doesn’t have the correct install.

I will reply for Mac OS X (what I’m familiar with at the moment.) The QuadtoneRIP forum is really the place to ask this question.

For OS X pre ElCapitan (don’t use ElCapitan yet we are debugging it):

Essentially you need to find your QUAD folder, getinfo and allow READ WRITE to all contents. On older versions of QTR (before 2.7.7) you read/write ALL for /Library/Printers/QTR/quadtone

Now I do this religiously every time I install new .quads.

If the permission is denied it will print 100% of every channel. Great for flushing a printer lol.

Mike,
I’ve too come from the darkroom. Over the holidays I spend a couple days printing Sel, WN, NU, Spec Ed, and SE/WN on 11 different papers. Four of those were gloss: Cone 5, Epson Exhibition Fiber, Canson Platine and Canson Baryta Photo. Cone 5 and Canson Baryta Photo both print a touch cooler than Platine. EEF is MUCH more neutral with the NU inks. My EEF was purchased during 2015. I mention this because Jon has mentioned that EEF is not what it used to be.

O.K. now we are getting somewhere. This is the linearisation chart for the profile Dana provided 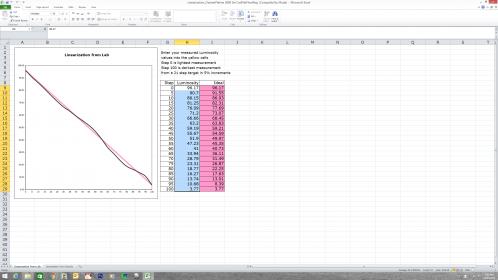 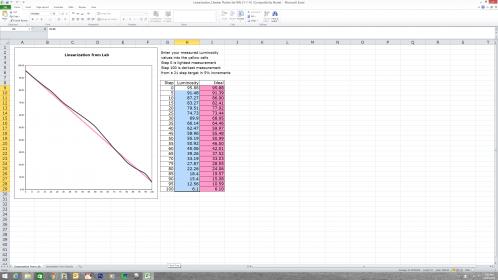 And the chart for the other profile I found for Platine Rag.
I guess it is my call which to live with, knowing in advance where there will be deviations from liniarity, or I could go down the custom profile path

You don’t have to live with either of them - you can use the so-called “droplet” created by Roy Harrington for relinearising quad files. It’s QTR-Linearize-Quad.exe in the install folder.

You don’t have to live with either of them - you can use the so-called “droplet” created by Roy Harrington for relinearising quad files. It’s QTR-Linearize-Quad.exe in the install folder.

Pardon my “newbie” ignorance here, but I thought the QTR curves and profiles were different beasts to the Piezography ones.
So if I have nonlinear Piezography profiles I can relinearise with the QTR program? I used the droplet to make some soft proof profiles, but noted that they could NOT be used for printing, according to the IJM website.
Obviously I haven’t found that bit in my reading.

Note that the relinearisation droplet QTR-Linearize-Quad.exe is different to the droplets for creating soft-proofing ICCs: QTR-Create-ICC.exe and QTR-Create-ICC-RGB.exe. There are also a couple of other QTR droplet-style programs, but when people here refer to “the droplet”, current usage is for this to refer to the relinearisation droplet QTR-Linearize-Quad.exe.