Is there a trick to getting the syringes to operate smoothly? Mine, both the small and larger ones operate stiffly.

If you wash these syringes in too hot water and don’t dry them apart they can get very stiff.

That said, these are meant to syringe both air and ink so they create a seal and this requires a stiff (low tolerance) syringe. aka, they are supposed to be stiff.

With these syringes, there’s a difference between operating stifly and smoothly, versus stifly and jerky. Most of my syringes are stiff, but work smoothly which is fine. However, a few of mine, mostly older ones, are stiff, but jerky. The jerkiness isn’t so bad when filling cartridges, but if I’m using it to refill my OEM Epson Workforce cartridge, it’s a problem because I don’t want a sudden jerk to blow any internal seals. The other syringe that operates jerkily is the small syringe I got from IJM with the head flushing kit. I don’t know why, but I cannot injet piezoflush smoothly into the head manifold and it makes me nervous that I’ll blow seals inside the head because of it. All other syringes I got from IJM are stiff, but work smoothly after a year.

I suspect piezoflush (and hot water as Walker says, but I haven’t experienced that) may remove some of the natural oils in the rubber plunger that make the syringe work smoothly. Some one mentioned to me that as they get old they become sticky or jerky.

For cleaning syringes, I bought a baby bottle rack and let them air dry for a couple of days before putting them away. I store the barrel, plunger, and needle in a small plastic bag once dry, separated as Walker suggests.
Larry

They do get stiff and jerky. In the country-land out here they are normally used by veterans (blunt needle for cows) and are designed for 1time use though they certainly work longer

I generally in the past have only used 4 as my normal filler ones and kept 4 back to replace as the rubber gets old. What I was saying above: cleaning with hot water can CAUSE the jerkyness issues. It effects the rubber.

Forget them. Here’s a much simpler solution: SquEasyFill

FYI, a blunt-tip-needle fits on the anti-evap end of all our bottles. 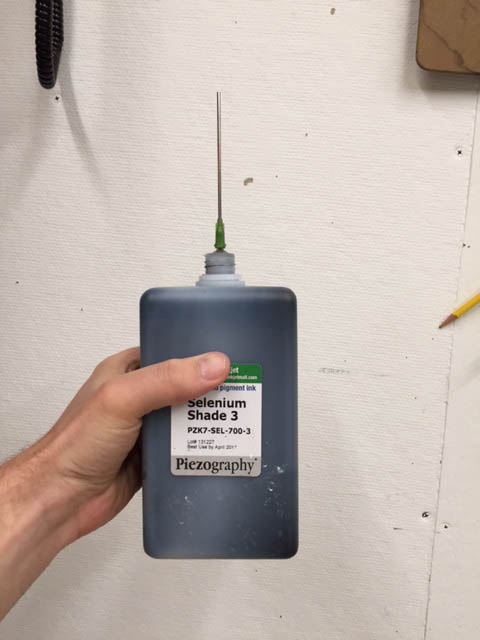 It might work, but as another user of the SquEasyFill bottles, I still think that they’re a superior solution. Their round shape and the soft nature of the plastic provides a lot of control - much more than you could achieve with the square IJM bottles, esp the smaller ones - which is precisely the issue that Larry was raising with the syringes. The fact that there’s no washing out is another bonus.

For desktop carts, I am able to easily and quickly use them to drain a cart and then refill it at refill time, as this minimises any chance of pigment sedimentation in the carts. They’re not that expensive.

Hey, what a neat idea Walker!

Brian and Jeff’s idea is good too. I have a whole pile of plastic bottles that would do, except I don’t have tops that could hold the syringes.

The main problem is my head flushing kit. Fortunately I don’t need it right now. Hopefully I never do.

if IJM were to provide caps for the needles, it would be better. That way you could leave it like that with a cap on. The IJM bottles are a far cry from the Squeasyfills so they are never going to be as easy to use.

Thank you for all the responses.

I do dry the syringe components separately and rinse with warm water, but still overtime I do think they stiffen up as compared to when new.

The SquEasyFill system looks interesting and will give it a try.

You learn something new everyday. Thanks!

Did you guys read this…

Probably the biggest additional advantage to the SquEasyFill system is that you don’t suffer problems caused by pigment inks on Syringe function. The problem is that the pigment particles act as a sort of sandpaper on the syringe chamber and increase friction between it and the plunger. This makes it harder to draw ink into the syringe or inject ink out. Eventually the syringe has to be replaced as a result.

The SquEasyFill bottles obviously just need a squeeze and there’s no friction to worry about."