There seems to be very little documentation for using Piezo Pro inks to make DN on an Epson 9900. All the docs seem to be for the K7 selenium inks. I don’t even know if I need to use Matte black or Photo Black settings on the printer. Also even though my printer is on and connected to the computer the printer install fails to install. I’m running the latest Piezo software on an iMac with Mojave.

Thank you Walker, but I still don’t know if on the printer itself I need to set it to Matte or photo black and the curves will not install even though the printer is on and communicating with the computer.

Got it, had to re-install QTR. I’m good, thanks.

As an aside to Brian’s now resolved installation question, and having just installed the Community Edition update, I’m wondering why I’m not seeing any quads in the 7900-9900-PiezoDN-ProK4 and -ProK5 folders. Brian didn’t indicate that he is missing them, so I am assuming there should be something there, and I suspect they are the same as those in the P7000-P9000-PiezoDN-Pro folder. Also, any idea why a few of the curve folders are displaying the little red minus sign as in this screenshot? There are a couple more farther down the list. 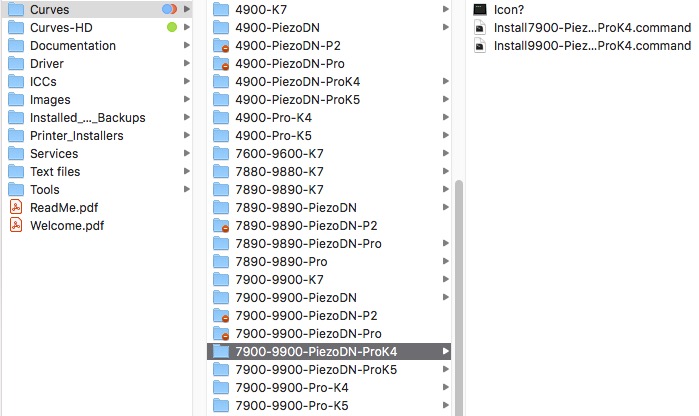 Is it possible that I have a bunch of old and maybe obsolete stuff in my curves folder? I don’t mean my own linearizations and other custom quads that I have made. Rather, using this portion of the list as an example, there are 3 PiezoDN-Pro folders for the 4900 and for the 7900-9900: Pro, ProK4, and ProK5.

As you know this is kind of academic for me since I don’t have any of those printers, but it might be meaningful for someone else.

The only exception is for DTP photopolymer-gravure plates, but that is a whole other beast.

Re-instal PiezoDN 2.8. Delete those old “K4/K5” folders. Everything goes into PIezoDN-Pro now and they are K4 compatible. But you need to re-install. Something is off with your permissions.