I was recently given a hardly used Epson R1900 that I would like to make piezo digital negs with. I see it isn’t listed as supported in your curve library though the r1300 is I believe. I have new refillable carts I bought from MIS loaded with piezo flush. I know these printers work well with K7 prints. Is it possible to make digital negs for platinum etc on them using qtr and some starter curves from your library? I’m going to be setting up a 7890 with a new head I just bought this fall for K7 piezo and digital negs but I need something to get started this summer for alternative process testing.

Should work fine with our R2000 PiezoDN curves.

Great. Epson made a lot of these little suckers for you to have to keep up with.

Yeah. The reason why we don’t officially support the R1900s is because most of these printers should be in cemeteries (aka, they are used beyond repair) so we don’t want to sell ink into printers that won’t work and have that boomerang back on us.

But if people have a 1900 that is in very good working order, there is no reason why our R2000 curves wouldn’t work well.

I don’t understand why you’re so negative on the R1900. Granted, it’s two generations old now, and I understand that as a business decision it’s not really economic for IJM to support a printer with so few active customers. But that’s partly the fault of IJM for not promoting it at the time like the P400 now is. Although it used the hi-gloss inkset rather than the K3, the R1900 is physically almost the same as the R2880, which was strongly recommended by IJM.

As I once infamously showed, the R1900 can use x880 curves once they are remapped. It’s an excellent Piezo printer for all the same reasons that the other 13" printers favoured by IJM are. Tyler used one for ages as an ink mixing test bed. Mine is still printing.

If any printer is worthy of being described in the terms you used, it would be the R2400, which IJM should have ceased supporting long before it did.

You answered your first sentence with your second sentence.

We recently stopped supporting/selling into the R1900 and R2400 many yrs after epson stopped supporting these models btw. Not sure what the problem is here (I admit, way past due for R2400) . . . It’s not economical to get the chips and cartridges manufactured for the R1900 as we just simply do no have the customer base. The R2000 was stretching it a bit even . . . there aren’t a ton of those customers out there but there is a lot of P400s coming online because this is the last new 8channel small-cart printer available from epson.

Re: R2880, there are a LOT of those customers out there still. Epson probably sold 10x more 2880s in the world so we are forced to continue supporting that model for the time being . . . . .

I don’t consider that I answered my first sentence with my second. I was trying to draw a distinction between printer quality issues and the economics or lack thereof of supporting a printer with a tiny user base. No argument that you can’t support a printer if there’s only negligible demand. (In practice “support” means supplying refillable carts. Curves can be ported and relinearised.)

But your statement “because most of these printers should be in cemeteries (aka, they are used beyond repair)” seemed to me to be a comment on that particular printer model. If so, then I contest that view. Being essentially the same printer as the R2880 it’s as reliable. I’m only really jumping in to give John some confidence in his printer. I would not be doing that if he had an R2400.

I wouldn’t worry about Mr. John Dean. If he wants a printer to work, it’ll work for him. He’s probably the best printmaker in the South East and has been around. I’ve probably learned as much from him over the years as him from I. He’s generally an exception to the rule but in general I stand by this:

But if people have a 1900 that is in very good working order, there is no reason why our R2000 curves wouldn’t work well.

Normally, I try to maintain (lower) expectations for customers re: support for very old models. R1900 and R2000s have different cartridges than the R2880s as well as a different internal ink inlet and internal pre-filter system that can make older R1900s that have been used a lot problematic compared to the R2880s.

R1900 and R2000s have different cartridges than the R2880s as well as a different internal ink inlet and internal pre-filter system that can make older R1900s that have been used a lot problematic compared to the R2880s.

It is true that the R1900 did not benefit from the most recent small cartridge redesign, being too old and having a smaller user base. I’ve got at least two iterations of R1900 cartridges, the newest version of which is identical to the penultimate R2880 cart. I often swap chips and interchange them. So I think the differences you’re commenting on are cartridge generational ones rather than something intrinsic to the printer. Getting good carts now for the R1900 is going to be the challenge.

And John needs absolutely no introduction to forum old-timers.

Yea, I’ve been working with these mis carts today flushing the system out with piezo flush. For awhile I kept getting the error light saying one or more ink carts was missing, eventhough they were in tight. I had to remove them and replace many times for the ink light to go off. I think my mistake was removing all of them at once. When I put the piezo inks in I’ll remove them one at a time. Once the k7 ink is in I shouldn’t have to remove them again to refill. Now all the channels have totally clean nozzle checks. It’s actually fun getting a printer for free and restoring it while wasting no ink at all. Someone else offered me a free 49O0 that had been sitting unused with inks in it for two years, clogged like hell and never used. I said no thanks.

I just bought the curve package for Piezography including the DN curves.

I have two questions:

I am using the HD Photo Black - there are two sets of curves in the Curves HD folder for the 1900 which are R1900 K6 and R1900 P2. Which curves work best for digital negs. I have no specific interest in making prints with this printer.

Second question is which ink assignment to which channel should I be using. I’ve checked the Manual and all I see is the Piezography ink assignment for K7 that I am enclosing there.

Want to make sure before I fill the ink carts. I am using straight K7 ( or K6 ) inks with the new HD PK. Need to know the correct positions for the correct DN curves. 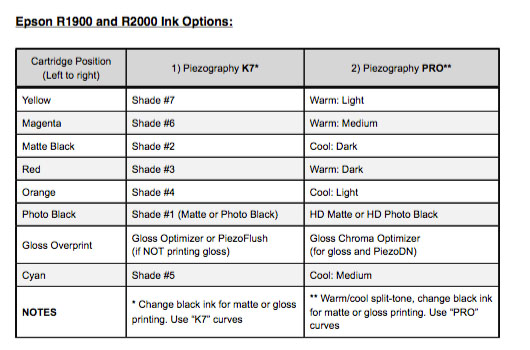 P2 config needs to be updated on the printed instructions (hint, it’s on the cartridges though!)

best option is P2 in my opinion as it allows for MK and PK in the same printer and then silk-screen or equivalent using MK ink (PK for normal negs/pos prints).

Thanks Walker for the quick response.

I don’t have any of the gloss optimizer here. Do I need to order and install that to do film negatives? Maybe it is automatically activated when using PK curves, or not?

The GO is used a bit with negs to harden them, but is optional. To print without GO for now just zero out the LLK channel in whatever .quad you are using (256 zeros under “# LLK curve”)

FYI, you’ll want to take a look at the private PiezoDN forum discussion about star wheel marks with these small format printers: https://piezography.com/topic/epson-1430-printer-modifications/