This may just be paranoia, but… I noticed that the VLM channel on my 9900 is reading considerably lower levels than the other live channels in my Pro-K4 ink set. Like half. Now I have definitely printed a fair amount of paper in the past week, so at first I wrote this off as just using more of the Warm Medium ink. But wait, I realized that the big prints that I made were all done with Cool, so that sounded a bit suspicious.

Investigating, I pulled the cartridge. All of the non-dead channels were filled to the top, accurately so since these are 350ml carts and the source bottles were also 350ml. And lo and behold, the VLM/Warm Medium channel is down “one block” on the cartridge. As a comparison, the Cyan/Cool Dark channel reads much higher on the “levels” displays … and it too is right about “one block” down. In other words, a very comparable amount of ink draw down.

Just to be sure I wasn’t nuts, I pulled the LLK cart, which is one of the dead channels. It has a Piezoflush cart in it, and it is left over from both initial fills. That is to say, I loaded it with Piezoflush, along with all of the others in the set, then did an initial flush to purge the color ink. Then I replaced all but the Green and LLK channels with actual Pro-K4 ink carts, and then did another initial fill. (This is exactly what the directions say, isn’t it?) The G and LLK are much lower than the other channels, as one would expect from this scenario.

So why is the VLM/Warm Medium indicating much lower than its actual level? On the ink level display on the front panel, it is visually lower than all of the others, including the G/LLK which have done an additional initial fill cycle.

I guess this is not the end of the world, because I suppose I can reset the cart and then watch it like a hawk to be sure I don’t run out and inject air into the lines. Or reset it and actually fill it with what I guess would be about a quarter of 350ml, so it would actually be full. Probably the safest route.

But why is that channel reading low?

To be entirely clear, here’s the front panel display: 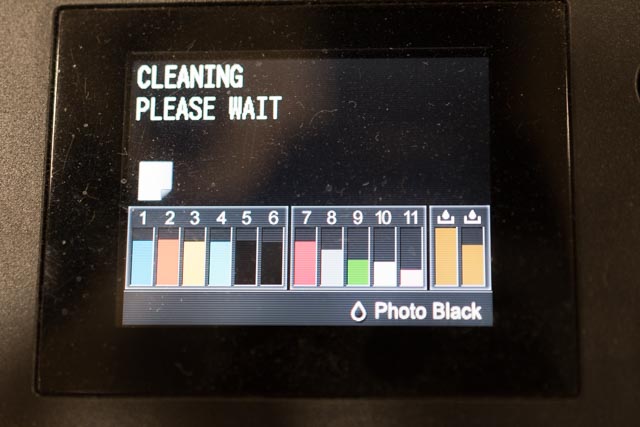 You can see that channel 11 (VLM) is indicating far lower than channel 7 (VM). But the cartridges look like this: 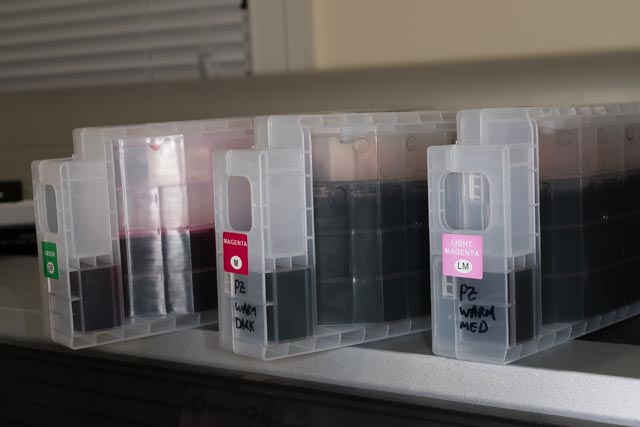 The levels aren’t exact, but I think it’s pretty obvious that VLM and VM are pretty close to the same level, while G (in the background) is much lower. But compare these levels to the display photo above…

I think these VLM chips are getting coded as 150mL which is a PITA that is hard for us to control as we don’t control the chip factories. I’m going to put this warning into the next version bump of the instructions. Resetting is the way to go here . . .

That might explain another oddity too. I had another VLM cart that behaved kind of strangely. When I put it in, the printer gave me a kind of scary message along the lines of “this is a third party cartridge, is it OK to accept this, at the risk of possibly lower quality?” It wouldn’t really take no, so I accepted it. Subsequently that cartridge - and only that one - reads “ink level cannot be determined.” It’s the only one of four sets of Cone cartridges that behaves this way.

On the other hand, I realize as I type this, the pictures above come from the same printer that complained about that other VLM cart.

I reset my cart when the blinky warning came on the front panel. It’s already starting to drop past the level of the other warm inks. In particular, it has already dropped below that of the magenta channel, which is Warm Dark. I’ve been mostly printing with cool and neutral, which I could imagine uses more warm medium than warm dark. However, the physical level of VLM (Warm Medium) is not very different from that of VM (Warm Dark) as measured by eye and as in the photograph above. If I had to guess - I sure can’t tell - I’d say that the VLM cartridge is being coded as 110 or even 80ml, not 350ml.

It’s not a problem for me in practice, as once reset it prints perfectly. I will likely just buy another bottle of warm medium and top it off in a month or so, just to avoid the potential of forgetting and drawing it down to air. But at my rate of (actual) consumption, it should be several months before I would get into that situation.