I’m experimenting with the ‘new curve ink limiting’ feature with a SP4900. When I apply more than 100% for the darkest tones, the black channel shows a drop in density. So, even at 101% the darkest tones (exactly that part of the tones where MK prints) print lighter instead of darker. Is part of the design and is there another way to increase the K ink load?

Thank you for your reply.

Here are a screenshot and a quick snapshot of a print of a random target.

I changed the value of the ink amount of the darkest tones to 150% - just a rather random value to test the feature (but I get the same effect of lighter blacks with 101 %). That’s the only value that I altered. Nothing filled in in the measurements tab.
It results in higher numbers of the K Chanel (that I remapped to LLK), which are also visible in the graph (LLK 118 instead of the normal 95), but in the snapshot you’ll see that the black strip on the right prints much lighter than normal, and that the patch that should be the darkest isn’t dark at all. 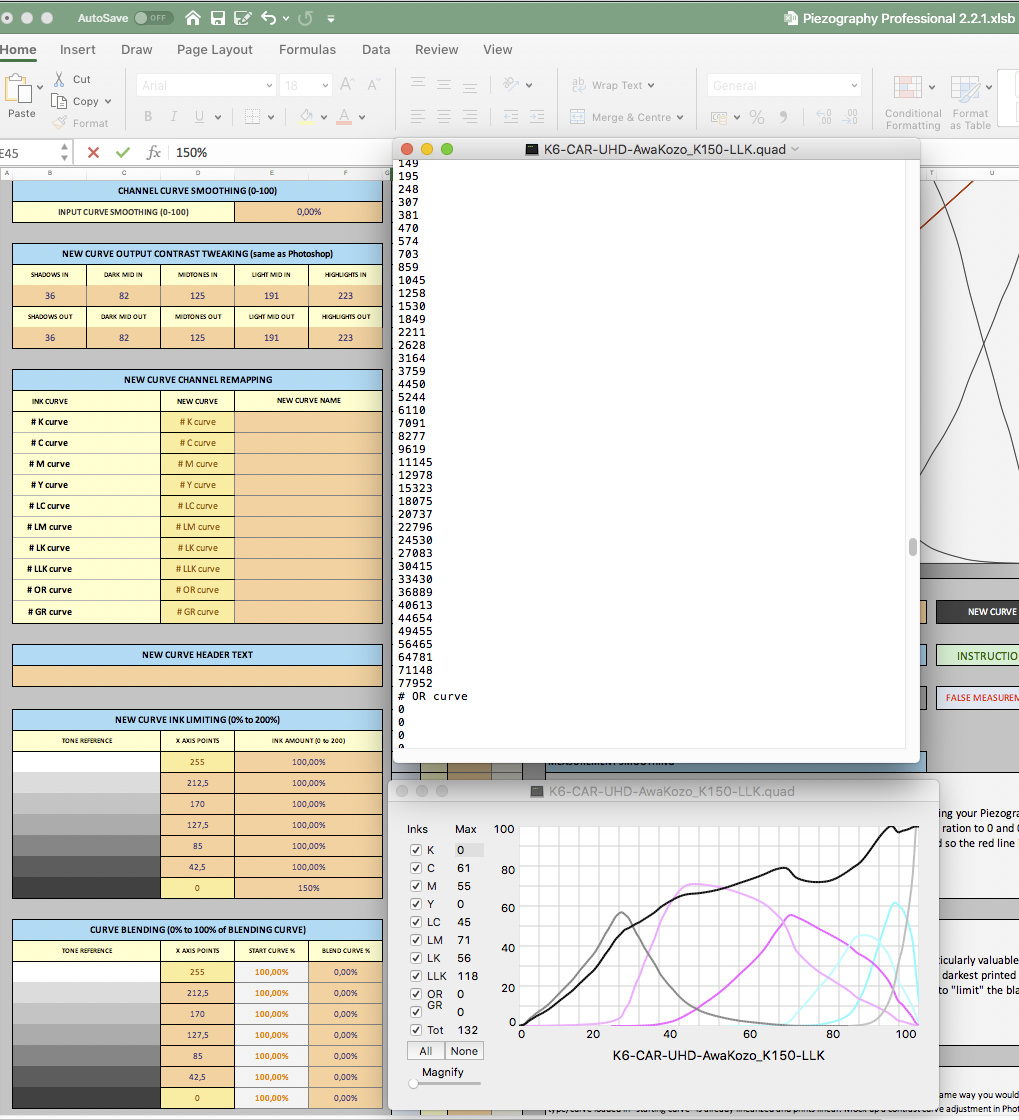 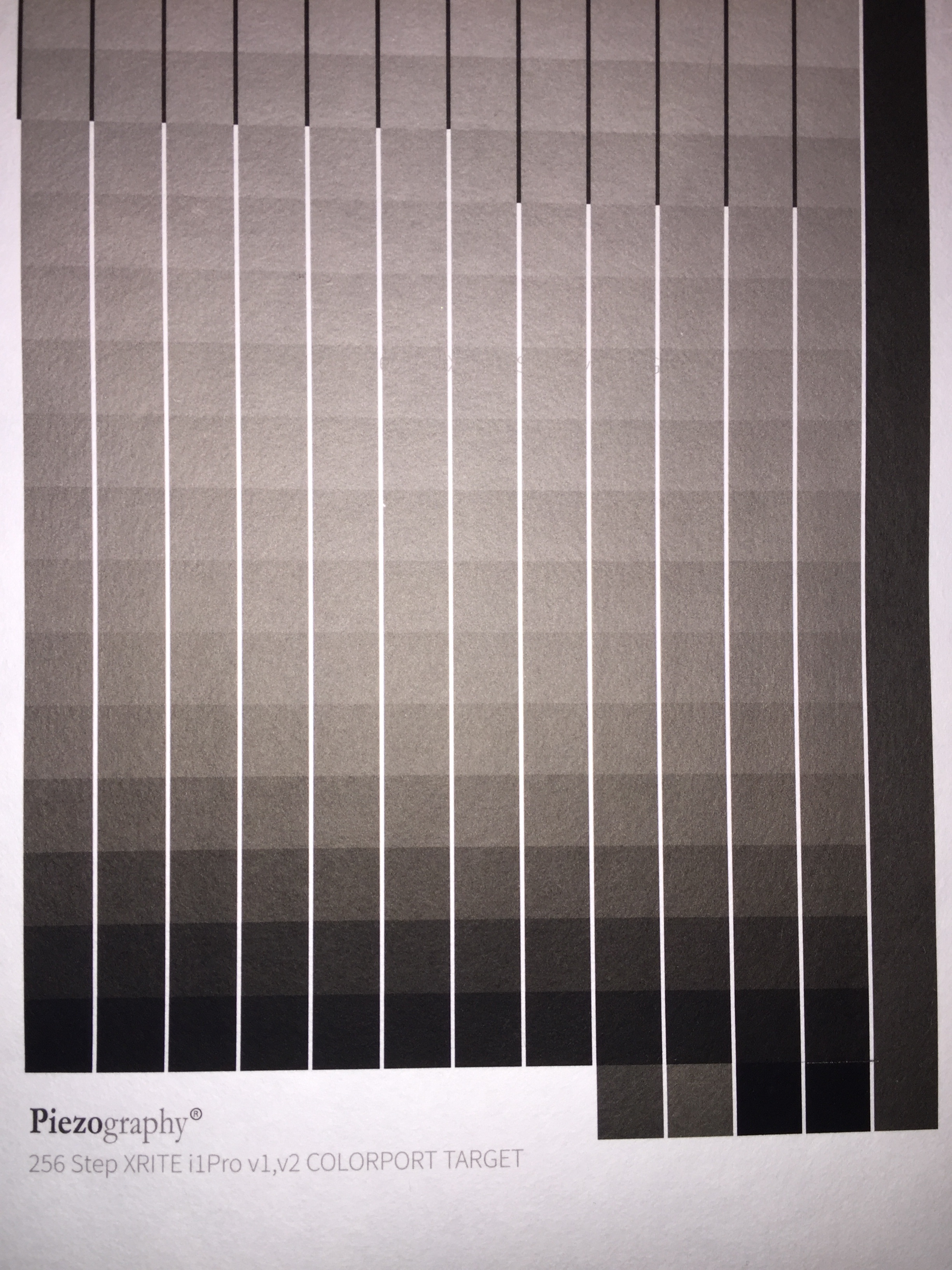 Overinking can result in lower density - really - not kidding. I think you may have just demonstrated this effect!

although the snapshot could give the impression that it’s just overinking, it isn’t: there’s less ink on the paper; overinking has to do with how the darkest tones reflect light (as far as I can tell) but should look darker when holding the print against a light source… I checked that, so it must be something else

I think you are mistaken. Your quad shows that there is about 50% more black being put down than the original quad for that printer/paper.

Over inking has to do with more ink being deposited than what is required to reach Dmax. Looking at it backlit only matters if that is how the print will be displayed. If you do intend to display them backlit, then how it looks in this non-backlit snapshot is irrelevant. Otherwise it’s just a nice parlor trick.

I have to deal with the same effect when printing Pt/Pd on thin washi.

I see the issue. Anything over 256x256 (65536) in single channel will register as zero. That is the max number. You have a few exceeding that. My tool does not correct for that error.

When I apply more than 100% for the darkest tones, the black channel shows a drop in density. So, even at 101% the darkest tones (exactly that part of the tones where MK prints) print lighter instead of darker.

I know I can be annoying, but somebody has to look closely at the details.

Marc said that this is happening using the New Curve Ink Limiting tool even when the xero ink amount is changed to 101%. However the screenshot he posted has 0 set to 150% and the corresponding quad shows the densest two values in the black channel above 65536. I duplicated what he did and got the same result. This does not happen below 126% – actually to be extra precise 126.108% which produces a high value of 65536 in this case. (Yes, you can input more than the displayed 2 decimal places and though the display rounds to 2 places the calculations use whatever you actually input.)

Now that Walker has revealed this secret, it is clear that this is what we see in steps 255 and 256 of Marc’s target print. This corresponds to the 71148 and 77952 values in Marc’s quad. But it does not change to zero in the quad produced by PPEv2, nor does installing it modify the quad in the QTR printer installation. My question now is where does it register as zero? In the printer itself? I’m imagining the printer being unable to handle a value over 65536 and defaulting to zero – is that correct? We don’t actually see the zero(s) anywhere – just the results.

So if both of these things are true – including what Marc said about setting zero to 101% and getting reversal at the black end – then I think maybe we have two things going on here. Both what I said earlier about overinking, and what Walker said about quad ink values over 65536 being read as zero.

Maybe I should qualify what I said about evaluating the print by viewing with transmitted light. Translucent papers are tricky. How they are displayed has a profound effect on how tones appear. I have dealt with this problem with Pt/Pd prints on thin washi and vellum type papers. When the print is held so that light can be transmitted from behind it appears pale compared to when view on a backing by reflected light only. Profiles can be made for either condition, but it is not possible to make a single profile that will be ideal for both conditions simultaneously.

Because of the way spectros work, readings have to be taken on a flat surface, and ideally the backing should be the same material as will be used when framing the print. When there will be an air space behind it – and light transmitted from behind – is where things get weird, because we can’t read a target that way. Maybe Marc’s comment about how blacks “should look darker when holding the print against a light source” sent me off on an irrelevant tangent, but this statement as written is mistaken. Maybe what you wrote is not what you meant. If you are only talking about normal viewing with reflected light, then what I’ve been saying about transmitted light is irrelevant – my misunderstanding. I might be flogging a dead horse, so to speak. Sorry.

I included the 150 data in my earlier message, and indeed these figures exceed the limit that Walker explained. So I checked all my other attempts, also the one with the 101% increase, and found that somehow all these quads had mixed up channels, probably because I still had a K7 printer installed, or I mistakenly mixed something up myself, although I have no idea what. Anyway, I trashed the K7 printer, trashed all quads and started from scratch. Everything works like Walker said, no surprise there. I had little time, but a first quick measurement didn’t show any increase - or decrease - in Dmax.

What I’m looking for is a subtle tactility of the blacks, rather than an increase in Dmax, a slight effect of excess that I get when putting the ‘ink limits’ slider in Print Tool at ‘50’. I’m glad to understand the limits and possibilities of PPE better now, and will make more experiments.

I agree that the slightly translucent Kozo depends on the backing, and I take care to always use the same backing for measurements. Although absolute Dmax is a relative thing, I fold all my large prints so that they fit in an archival box of the (once) standard 24 x 30 cm. I unfold them when I have a show. Because of the folds and the translucency, there’s a play of light and shadows that can’t be measured.

I included a screenshot of both a normal (top) and a messed up quad (bottom). It’s stupid, but I concentrated on the blacks, and I completely missed that the other patches were way off as well. Mea culpa, and thank you both for the help. 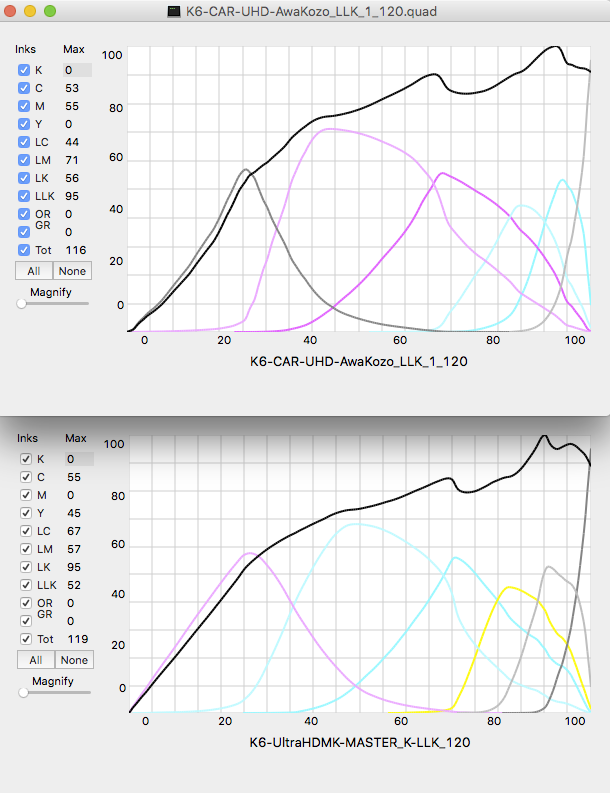