I saw the other recent thread here with some other user having issues with his dampers after replacing them on his epson 9800. I am having a similar struggle, but yet symptoms a bit different so I am posting a seperate thread here. 3-4 months ago I acquired an epson 7880 intending to clean it up and use it for piezography - did the whole piezoflush thing and cleaned capping station, wiper blade, etc. Changed the dampers and did the INIT FILL - managed to get clean nozzle checks. But had problems with leaks - I could physically see piezoflush leaking inside the printer from the print head. All I needed to do was to push the print head out into the middle of the printer and let it sit there for a while. 3-4 months ago I diagnosed it that it appeared that damper 3 and 5 (from the left) where the leaky ones. So I orded 8 new dampers and another bottle of piezoflush and exchanged damper 3 and 5. I did not do an init fill immediatly - but let the print head sit out in the middle of the printer for 3-4 hours - to confirm there was no leaks after exchanging damper 3 and 5 (they where empty as this point). Then I did an initial fill, and got the printer in a condition to print nozzle checks with no broken parts. I let the print head sit out 3-4 hours yesterday. And then just making piezo flush test prints today, and let the print head sit out again for a long while. And - sigh now it is leaking again. When I try to estimate where the leak is coming from (Based on seeing where the flush is running down the printer) it seems like now its damper 6 that is the suspect.

So I took the damperunit out again.

First of all - the connection to damper 6 looks like something fishy is going on: 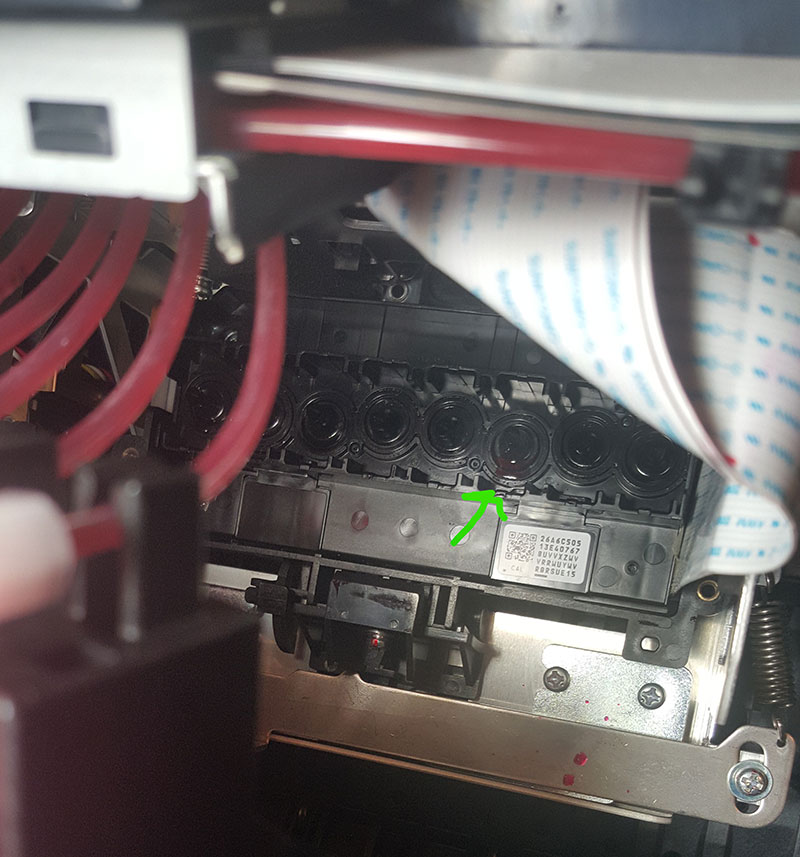 Then I let the damper unit stand and rest for 20 minutes like this: 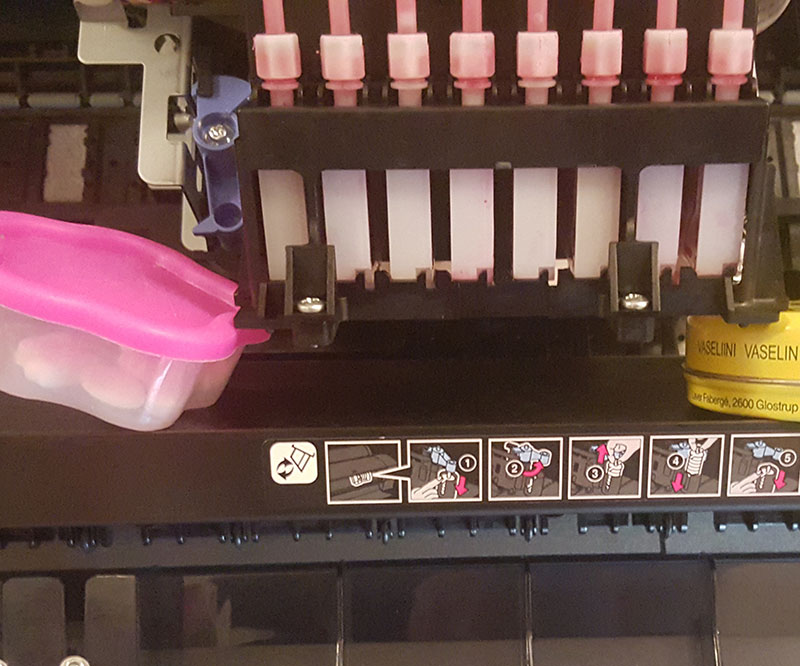 Aaaand I see this after 20 minutes - it looks like the damper is leaking. 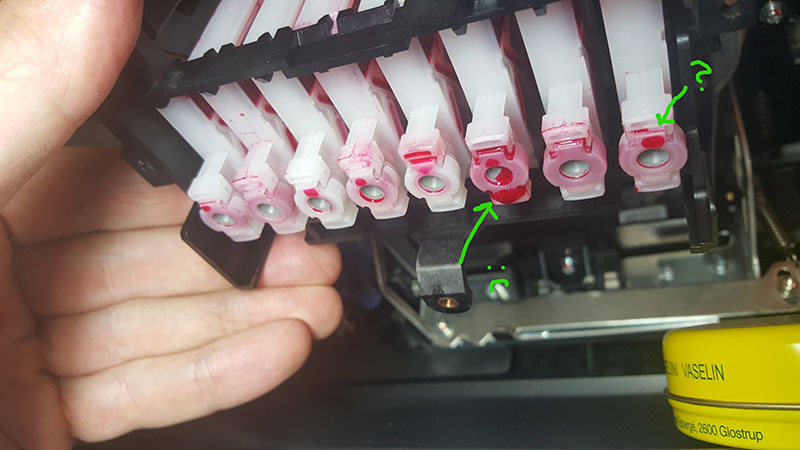 This is how the dampers look at top 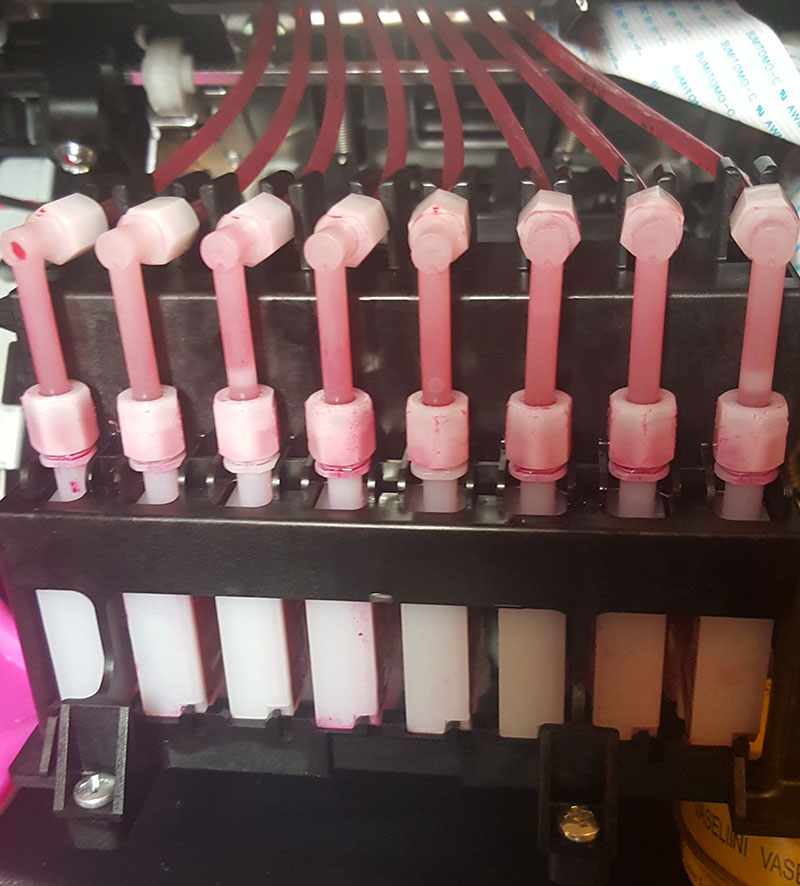 So basically I am wondering what the darn is going on with my dampers. I am sure it is me doing something wrong, but I have no idea what. It just seems fishy that I would have so many broken dampers. I don’t know if perhaps I do something wrong with the damper unit when I reinsert it, that somehow can damage the valve? But not sure what it would be. I try to be carefull, and it doesnt feel like I am forcing anything - it just slides naturally down into place.

Any advice is highly appreciated. I have 6 more dampers in stock and a whole gallon of piezoflush as well. I would really like to get this printer up and running with ink

There are four places where the dampers can leak: at the 90% angle arm for and aft (not showing leaks in these photos), through the thin film holding the ink in the damper, and at the print-head.

These printers were the last holdouts of the old-school dampers and Epson (thankfully) went to more robust and less leaky systems for the x900 printers.

It looks to me like your dampers were not sealed/affixed tightly enough (especially damper 6). There’s no way for me to tell if it’s also leaking from the thin film of the damper unless you take the whole shibang out and post photos of the sides (making sure to label them for the photos).

My hunch though (considering this is piezoflush and you’ve gone through a lot) is that you are simply not getting them on the printhead in an aligned way or tight enough. The screws can actually thread in and feel secure but the dampers might still be wonky. This is literally the hardest maintenance part of the x6 and x8 printers.

Pull out and repeat gently. If you see an entirely other damper “leak” but not #6, it’s most likely just the act of putting them on that is messing things up. Also try switching damper #6 for another position and see what happens. It takes time but this is the way to figure out if it’s a position issue or actually a damper issue.

Hi Walker - thank you for the input.
I have tried taking the damper unit out again, and tried to make sure that the unit is as aligned as I could get it - I push all the 8 dampers all the way to the back of the holder (to make sure they are aligned) and then when I insert the damper unit I do my best to make sure it is as perfectly aligned as I can get it. Perfect nozzle checks, but still the same issue - leaking coming from what appears to be the 6th damper at the connection point between the head and the damper.

As I mentioned in my post - if I let the damper unit stand outsite the printer - the 6th damper leaks as well - which to me does not seem normal - exactly the same problem I had with my damper 3 and 5 before changing them. I just dont see why I would be getting so many damaged dampers from inkjetmall? Which is why I lead to question myself and my technique which seems more likely to be the culprint. I am more than happy to exchange damper 6 again, but I fear if I just to the same thing again and again, then maybe when I do another recharge of the ink then it will be yet another damper messing up…

By leaking of the damper 6 - just to clarify - when it is standing outside the printer - still connected to the ink lines - after letting it stand for say 20 minutes I see ink build up in the exit valve.

It’s hard to tell what is causing the dampers to filldrip when out of the printer when carts are out and no pressure active. It leads me to think it’s tiny hole somewhere in the 0-ring/seal inside the damper caused by the first miss-aligned placement of the dampers. You need to order another damper from either IJM or Compass Micro.

My first damper replacement on a 9600 made this happen (with OEM dampers). My second also. On the third try I got the hang of it and stopped damaging the dampers . . .

These types of very user-intense installs are basically impossible to trouble-shoot online sadly. There are too many variable at play.

I have 6 extra dampers as spares so I am ready to give it ago with another exchange. I was wondering if I need to do the INIT FILL or if some power cleans are ok to refill the damper?