I then did an init fill with piezo pro inks (made sure all cartridges were properly primed with no visible air bubbles). The first nozzle check had a few missing in various places so I ran a standard clean, which resulted in only one nozzle position missing.

I then printed a couple of A4 pages of quad tone purge files (all channels), and noticed some banding toward the end of that, so I ran another nozzle test. More (random) nozzles missing. I then ran a power clean, but still resulted in various nozzles missing.

Just in case, I have done all the standard maintenance cleaning as in Dana’s video, run another standard cleaning cycle, but still getting some random nozzle dropouts.

Any suggestions? My guess is maybe dampers? I had hoped they would be alright having been sitting in piezoflush for quite a few months.

Can you post a photo of the nozzle check(s)? If it is random nozzles missing, this indicates dampers that are full of crud filling the damper screen that can’t be purged by the PF process . . .

4 different nozzle checks here. As you can see, different positions each time. I’ve noticed some in the cyan channel, most in the yellow, some in BK, and quite a few in LK (damaged channel filled with piezoflush, so not worried about that one). Not sure about LLK, as it’s filled with Gloss chroma optimiser.

An amendment to my earlier statement; I just went over the nozzle check filled with piezoflush prior to installing piezo pro, and did notice some dropped nozzles there too.

Finally (I guess a different question), I ran quad tone purge files, and noticed that gloss chroma overprint is coming out a faint pink. I’m guessing that means it’s still contaminated by piezoflush? Still not gone after running one power clean. Is that common when flushing out piezoflush? would it commonly require two init fills to remove that entirely, and would it mean my other channels are also potentially tainted (though maybe not visually obvious through the other inks?) 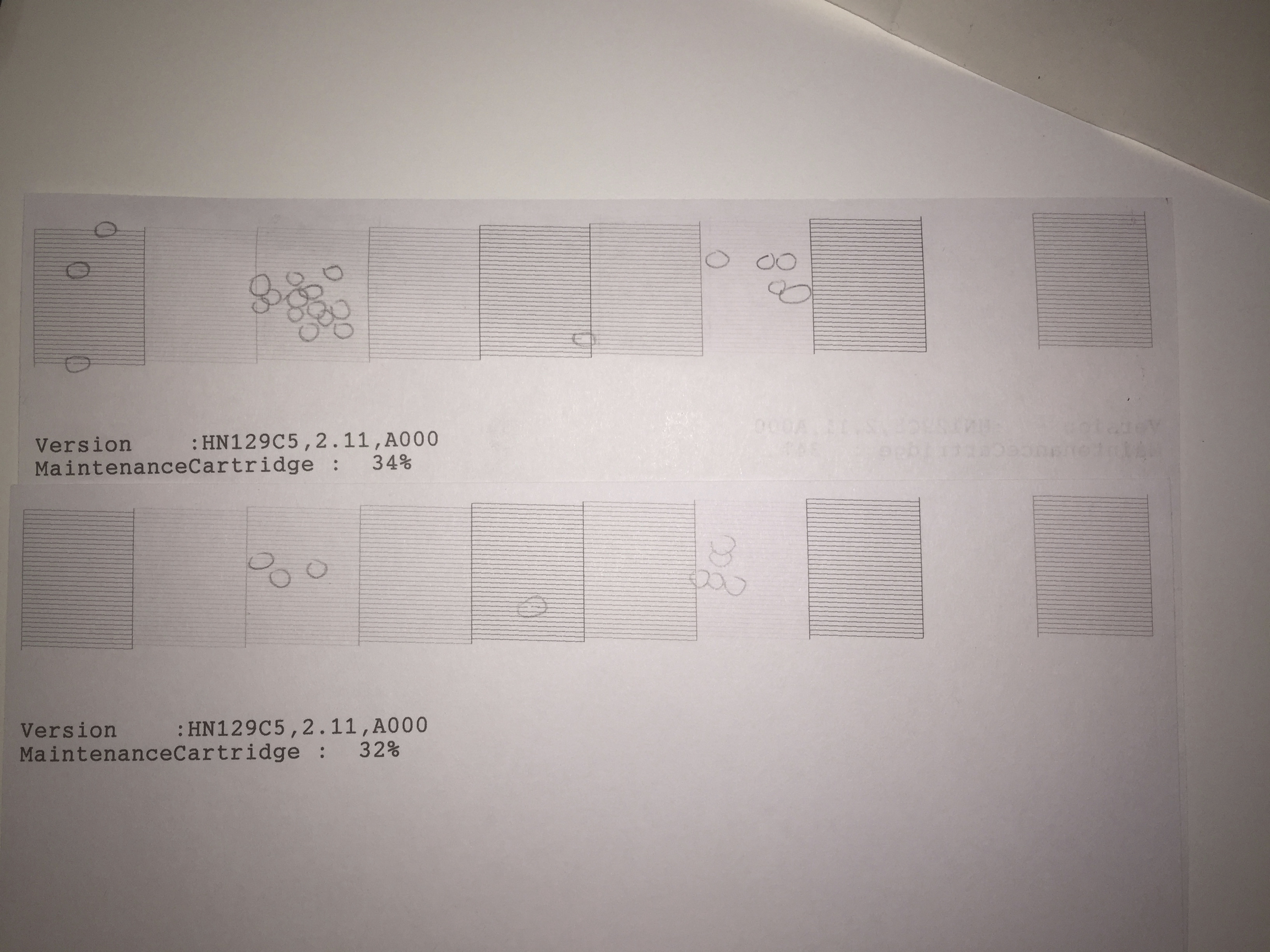 Thanks @walkerblackwell. As per the photos of nozzle checks above (all with cleanings or quad tone purge prints in-between), what is your recommendation?

Without really knowing what I’m talking about, I don’t know if I should keep trying to purge print it out, do more cleaning or power cleaning, or change the ink selector/dampers. Either way, I don’t want to waste more ink than I need to.

Considering that there is a bit of PF still in the lines, I suggest a few more normal cleanings in a row and check.

It looks like it’s going away. There was a changeover and your head is working to eliminate the crud. You don’t want to ever print with out nozzles (besides your dead channel) though. Not on this printer. People damage their printers printing flush targets with bad nozzles this way thinking that somehow printing will fix the nozzles.