So this is my first post but I promise I’ve been “in the field”, so-to-speak with this stuff for several years now. I’m hoping someone can spot some possibilities that I haven’t thought of yet.

We’ve had our 9890 (using Cone color inks) since 2015 and we thought it was down for the count about a year ago but we managed to get it working again after we replaced the wipers and did a flush… nothing really changed after all that, but it actually got “fixed” once I ran a humidifier and heater in the room (we’re in a basement where it gets cold and dry at times). One day, after spending two weeks running cleaning cycles after we did all that internal work, etc… the magenta was back! For about 1 year I got super obsessed about running nozzle checks via QImage software once a day. And that kept things humming…

Fast forward about 3 months ago. We did a big job that involved a huge (44 x 50) solid “red” field with some graphics on top for a big computer game company. The first print was great… but I scratched it. Ran a 2nd print and about halfway the magenta stopped coming through. Even though there was plenty of ink. Went to clean it and nothing worked and we were never able to clean the magenta since. I’ve run all the various “modes” of cleaning, even up to CL4. I don’t do them successively because I know it can burn out if no ink is coming through. I tended to do them on their own with some nozzle checks, giving a half day or full day between the next session.

About a week ago I decided to start getting somewhat methodical about everything. ie. “keeping notes”. I also set up the ol’ humidifier and heater, hoping it would work. But still to no avail.

So I’ve posted these shots of my nozzle checks with some notes on each one. I’m hoping maybe some of you will notice something that might give me an idea what’s up. Notice the “dusting” that occurs on #2, for instance. What causes that? Also notice that if do a cleaning cycle, I get a horrible nozzle check, but if I don’t do a cleaning cycle, the check looks actually better… but it doesn’t improve much.

Thanks for any ideas. I’m wondering if I should buy a new head, but my biz partner says “but what if it’s not the head that is the problem?” 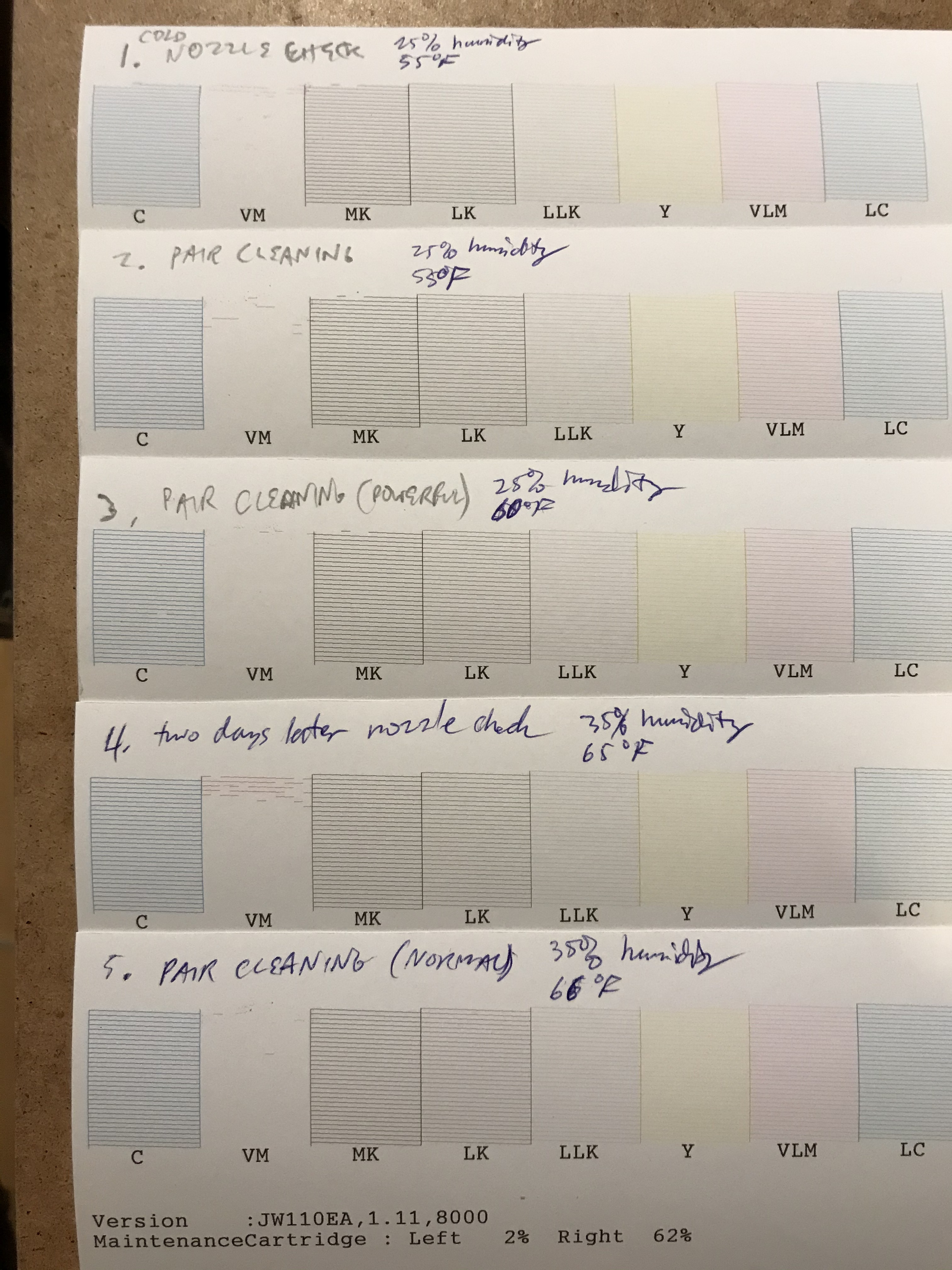