I’ve recently replaced the standard black inks on my 3880 with HD-PK and UHD-MK. Until this past weekend I had only attempted to make digital negs on it since installing the new inks, with no better success than previously. I think we have narrowed the source of that problem down to either the printer itself or to the Carbon inkset that I’m using. I know others are having good success with this printer and other K7 inksets. But this question is not about negatives, it’s about prints on paper.

A couple days ago I installed the HD K6 printer and removed the older non-HD K7 printer, since it is no longer applicable (I think, maybe). That’s when I noticed that the HD version is K6, not K7. None of the curve use shade 7 at all. I was used to this for PiezoDN curves, but it was a surprise for normal print curves. So I ask myself, is there any reason at all to use the normal HD K6 installation rather than the P2 installation since neither uses shade 7?

I decide to take a closer look at some of the curves. Since Moab Entrada Natural is the paper I keep in stock, I look at the HD K6 and P2 curves for that paper. Since they should be using the exact same inks in the exact same positions, I expect there to be no difference, but there is a slight difference, primarily in the black curve. (Note: I’m a beta-tester for the new driver so I’m looking at this with the associated tools, though I’m not yet using that for printing on paper.) The HD curve (UHD-MK) uses more K than the old K7 curve. What is weird is that the P2 K curve looks to be the same as the old K7 rather than the new HD-K6.

There are two curve folders: “curves” and “curves-hd”

We have 30 printers set in P2 config and this is a dramatically more adaptable system than K7 so we did the profiling on the P2 printers that we already had set up at CEP. For anyone with a K7 system currently who wants to print with the new HD black ink and our new curves structure, the “K6” curves are compatible with any K7 system. For those who have moved to P2 (which I recommend at this point), the P2 curves are there as well.

Well, damn! It looks like I was taking the P2 curve from the old folder. I was sure I had the right one. Sorry, mea culpa.

But thanks for confirming my suspicion about using P2 rather than K7 ink configuration. I think I’ll switch.

We have 30 printers set in P2 config and this is a dramatically more adaptable system than K7 so we did the profiling on the P2 printers that we already had set up at CEP. For anyone with a K7 system currently who wants to print with the new HD black ink and our new curves structure, the “K6” curves are compatible with any K7 system. For those who have moved to P2 (which I recommend at this point), the P2 curves are there as well.

Walker, can I just clarify the generality of this comment? Does it apply to both paper and DNG? To all printers?

It wasn’t that long ago that there seemed to be resistance at IJM to P2 where it wasn’t needed. The argument was that it wasn’t in a printer with switchable blacks (which included the desktop printers with carts-on-head). If P2 is now the recommended configuration that would be quite a shift.

My view has long been that the benefits of shade 7 are negligible to nil, that the convenience factor for P2 is high, and the maintenance burden in preventing pigment sedimentation is much lower in printers with ink lines and dampers.

PiezoDN P2s are universal since before we publically released HD inks so no need for specific hd ones, the old masters will work with hdpk.

This was never a mater of orthodoxy but one of timing. Coming out with hd black inks was a good way/time to transition more to p2 publicly as we had already done so at cep internally for a while. It also just made logistical and labor sense during profiling.

PiezoDN curves have always been K6/P2 (they have never used the 7th shade).

SO, IS IT GOOD ENOUGH?
It’s way better than good enough! The six shades are still twice as many than Epson’s three black system. Piezography2 adds two additional shades for the shadow end and one additional shade in the highlights in direct comparison to ABW. But, Piezography is so much more than Epson’s ABW. ABW is really good inkjet. Piezography is photographic printmaking, and it does not have any of the tell-tale signs of inkjet. Piezography2 is about producing a higher standard than the OEM, but with more flexibility and ease of use.

The 3880-Pro folder in the beta-driver that has a PiezoDN-Master quad with a K curve I could remap to the P2-Yellow channel. I think I would also have to zero out the K channel.

Am I thinking straight here?

So Walker, are you saying that the PiezoDN quads are the same regardless of which PK is being used? I hope you will forgive me for being a little skeptical. When I look at the PK and HDPK master files for normal Piezo printing from the corresponding folders, I see a significant difference in black ink usage. There is quite a bit more HDPK than standard PK, and this seems consistent with something you said elsewhere (maybe in a forum thread or maybe directly to me) about the HD version being blacker (higher Dmax) but less opaque. Here are the CurveViews of what I’m referring to: 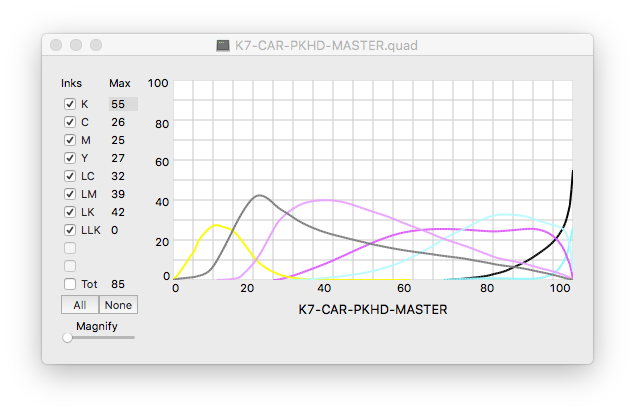 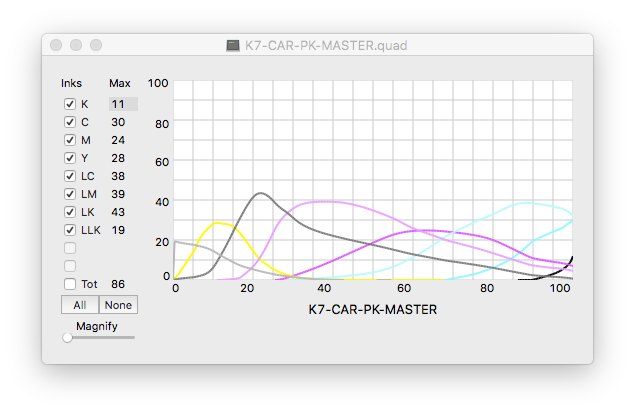 Is this not relevant for making negatives? There are no HD specific PiezoDN curves, but I notice that the Pro PiezoDN curve for the 3880 in the beta-driver uses a lot more HDPK than anything I’ve seen using regular PK. 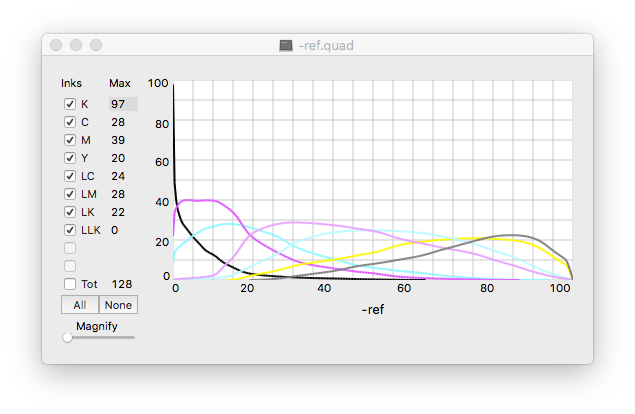 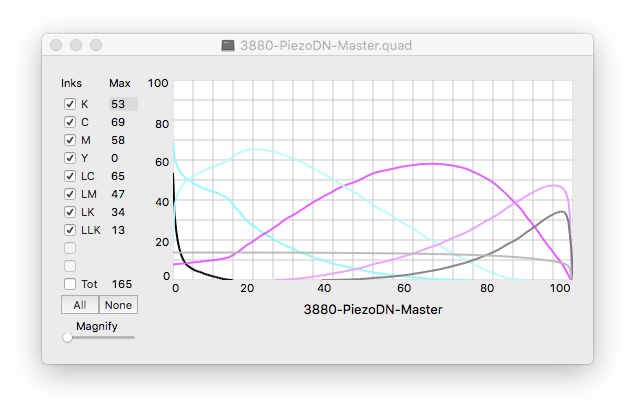 Obviously, they are different inksets, aside from PK or HDPK, so I wouldn’t expect the K usage to be identical, but that looks to me like a significant difference, especially when viewed in light of the difference in the first pair of graphs where the only difference is PK or HDPK.

I’m kind of grasping at straws to figure out if anything is going to work on my 3880. Ink on paper looks beautiful, but, well, you’ve seen what the negatives from my 3880 look like.

The ink on paper HD curves are built to minimize gloss differential with a PK that is much glossier than Shade 2, thus different ink amounts and the weird shade 2 underlap.

The ink on film PiezoDN curves (for legacy non-pro inks) only have to create dMax and originally much of this was done with shade 2. Existing curves still get very high dMax with HD-PK ink so these are cross-compatible after the version 2 dMax bump in PIezoDN. Only legacy PiezoDNs are cross compatible.

The Pro PiezoDN beta/driver curves are different. Less total ink (128 instead of 165) and less printing of dark grey because the dark grey inks are actually lighter than traditional shade 2. So that means for the pro ink you need more HD-PK and less total amount of ink is needed.

These curves are not arbitrary.

I admittedly come to Piezography from a professional printmaker end + as a customer since 2003. Whatever is most pragmatic and practical as an output system now (P2/Pro/PiezoDN, k7 for some) I’m going to recommend regardless of history, i’ve been doing this since iQuads on the Epson 3000 so have seen all the changes. The end goal is always to make the best possible print. If we can make it a bit more user friendly at the same time that’s a plus.

This was never a mater of orthodoxy but one of timing.

I could point to forum posts by your colleagues that pre-date your arrival that suggest otherwise. But debating history just for the sake of it is pointless. Thanks for that clarification about the current position. Sorry about missing the point on DNG, I should have known that, despite not being a user. Apologies also to Keith for intruding on his thread to check the current position.

(As a general comment, IJM needs to realise that users’ understanding of Piezo is not just from the various iterations of the manual and other documentation. There’s also the accumulation of little snippets on this forum over time. A bit like black letter law being supplemented by the accumulation of case law. And when a new snippet emerges that seems at variance with previous ones …)