Halos on my PiezoPro Epson 3880

So there are very obvious “halos” on numerous prints coming off of my Epson 3880 using PiezoPro Inks. By halos, I mean noticeable drop offs between lighter areas and their black backgrounds. It’s no longer a smooth graduation but rather a line. I thought something was wrong with the file but when I printed the same file on my standard Epson 3880, the were no halos.

I tried different papers (gloss and matte), different settings, replenished inks, anything I could think of and the problem still exists.

The problem has rendered the printer useless. Anyone have any ideas? I should add that I am not a techie so I am at the mercy of standard profiles and simple, easy to follow directions.

This indicates the head is skewed. You can do a skew test.

Thank you Walker! I will give that a try this afternoon!

So I spent yesterday downloading the maintenance program and setting up the printer on a Windows platform (I’m a Mac user so this took most of the day!).

I have printed out the Print Head Slant (PF) test and have adjusted it as best as possible. I then moved on to the CF adjustment and printed out the test sheet. Now my problem…what the heck am I looking for? The sample photos in the program/maintenance manual do not match the B&W output so I am at a loss in terms of what I am looking for on my test print. I can be dense at times so any help would be greatly appreciated.

Thanks Walker for the quick response. You are the best! I’ll try some glossy paper next.

Ok. So now I see the lines and have adjusted the head to center them per the manual. Unfortunately, it resulted in little halo improvement which puts me back to square one. It is interesting to note that the adjustment is extreme in that the lever is all the way at the top. Not sure if that at all matters considering the lines appear equal. 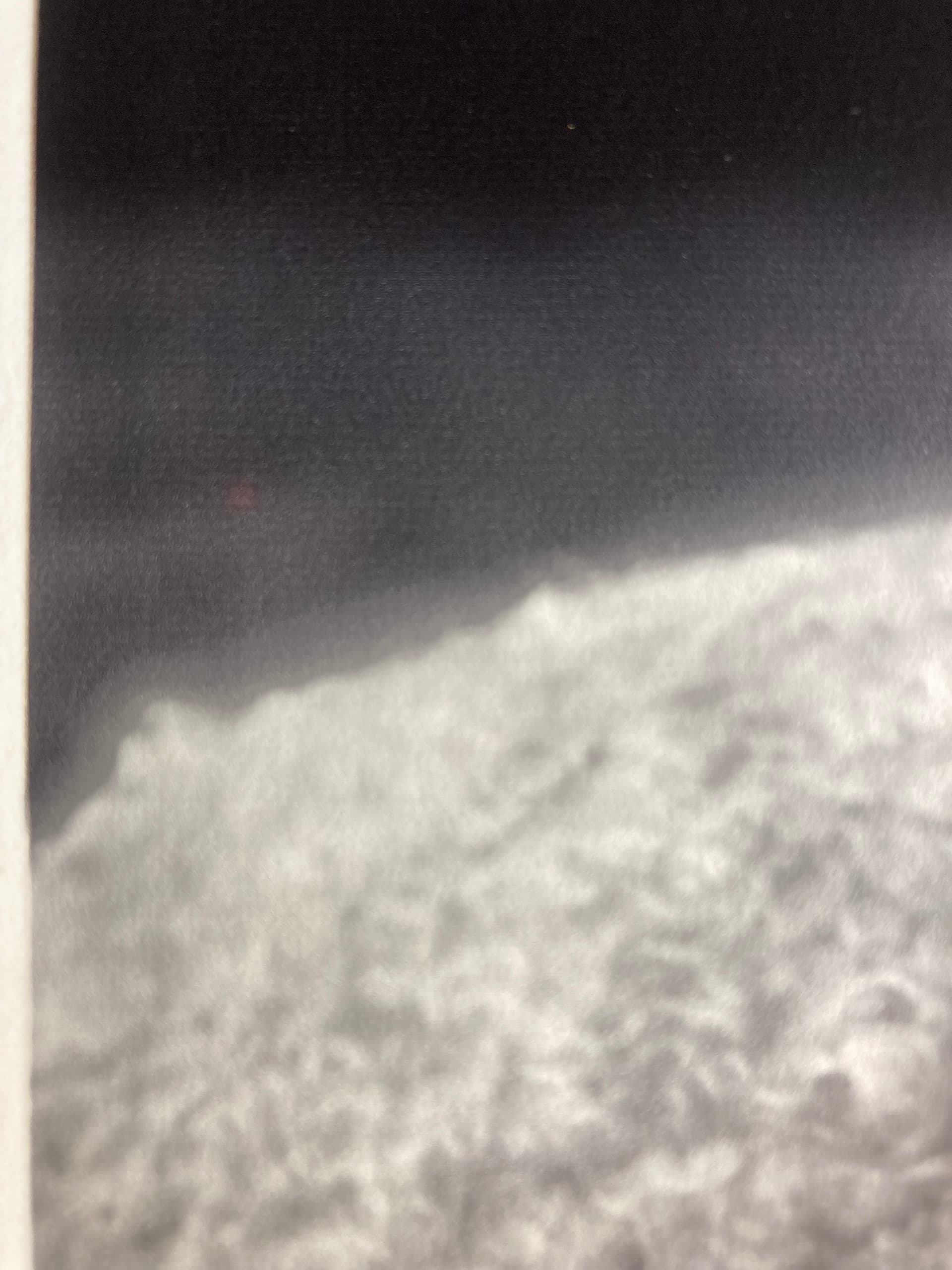 here ya go…It is very obvious between the light and dark sections.

Print a gradient, it will most likely show a lot of banding. What curve are you using!!?

I printed a gradient and as predicted, there is banding. I’ve never done anything with Linearization as I don’t own a spectrometer thing-a-ma-bob and it’s my understanding that I need one in order to perform the process/calibration. I’ve been using your curves for Canson Platine…or at least I think I am! That said, I’ve been messing with this thing for quite a while and it’s very possible I’ve messed up the original settings. Should probably go back to the start…if only I can remember where it was…

Please share screenshots if your printing process and settings.

Here are the two print screen shots that I use… 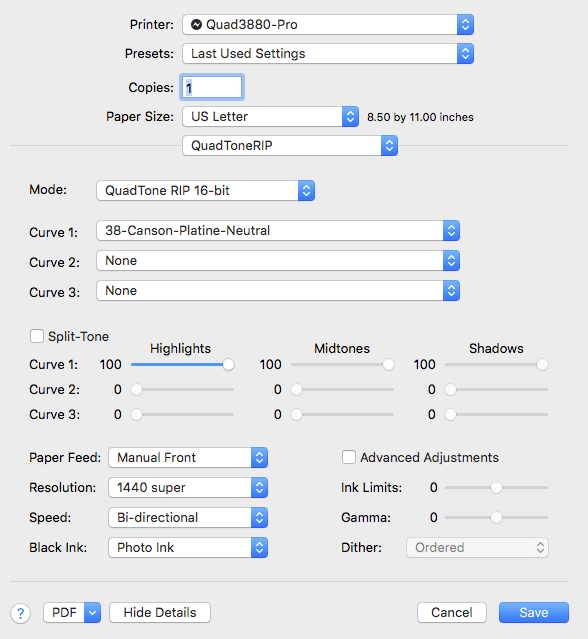 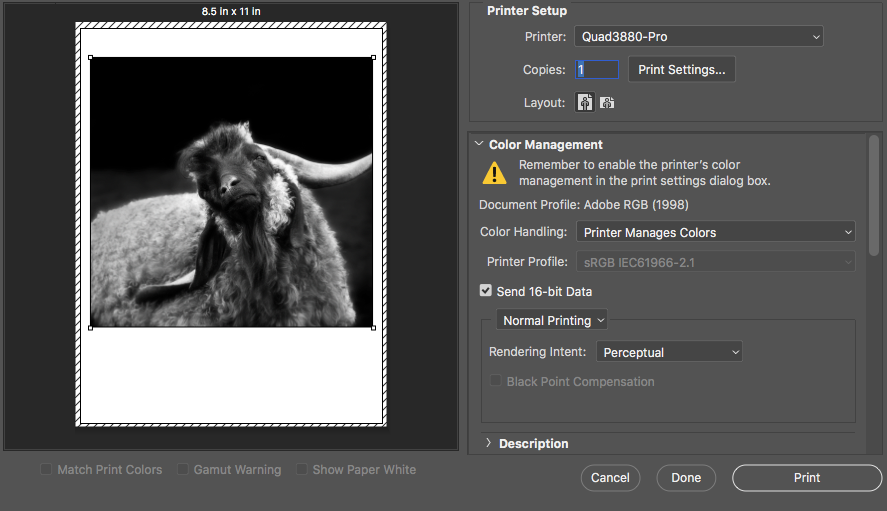 Oh my. That is very different from my current process. I’ll give it a go now. Fingers crossed!

First test print looks better although there still seems to be a halo - just not as obvious. I’m going to dig out the print made on the other Epson to compare. But I think I have another problem…with all this critical viewing, there is noticeable (with the aid of a magnifying glass) horizontal banding on this print. One the previous print, using my standard printing process via PS, there was vertical banding.

Forgive me for butting in here, but printing with QTR out of Photoshop has been problematic since Snow Leopard (OSX 10.6) if my memory is functioning correctly. I don’t think that has changed, though I know there are some who seem to get by with it.

The main problem was and is the lack of an option to print with No Color Management. Your screenshot indicates you are using Printer Manages Colors. Print-Tool was developed specifically to deal with this problem. It also has some other nifty features.

Personally, I don’t use soft-proofing at all (items 1 and 2 of Walker’s list), but I may be in the minority on that count.

I would also add another item to the list:

Perhaps more importantly, I don’t see anywhere in the thread that you actually say what paper(s) you are using other than the first post where you mention using different gloss and matte papers. I do see that you are using the Canson-Platine-Neutral curve. Part of this could be a mismatch of paper and quad curve.

Regardless, Piezography is always best with the highest available resolution setting, 2880dpi for the 3880, and the slowest speed setting, Uni-directional rather than Bi-directional.

I would also suggest using the rear feed rather than the front.

Thanks Keith for your input! Most of this stuff is well above my head but I have done my best to muddle through it…well, at least some of it.

You are correct to assume I am currently burning through a batch of Cason Platine. With the new settings and print module I am curious as to your comment regarding a mismatch between paper and quad curve. Perhaps I will try a different combination (including uni-directional) to see if it improves the banding.

So the results of Keith’s suggestions did offer a huge improvement. I switched over to Hahn Pearl and changed the profile accordingly. The halo is completely gone and the banding is not nearly as noticeable (although there are still hints of it). Now, the problem I am having is with the paper. My printer suffers from pizza wheel marks which is why I was using the front feed. Rear feed doesn’t seem to work and now, possibly because of the curl of the “new” paper, the front feed isn’t up to the challenge. Time to take a break.

Back at it this morning. Since I can’t get the Hahn Pearl to feed correctly, I switched to Red River Big Bend Baryta. Trouble is, a curve for this paper does not seem to exist. Has anyone come up with one? I tried using the Hahn Baryta curve and it was a major fail.