I know this might be a bit of a stretch to see this in a jpeg but should there be this much gloss differential using Selenium inks on Canson Baryta Photo? I was printing the Custom Curve target and noticed how matte the black looked.

This was printed with two hits of the 30000GO curve in Print-Tool. 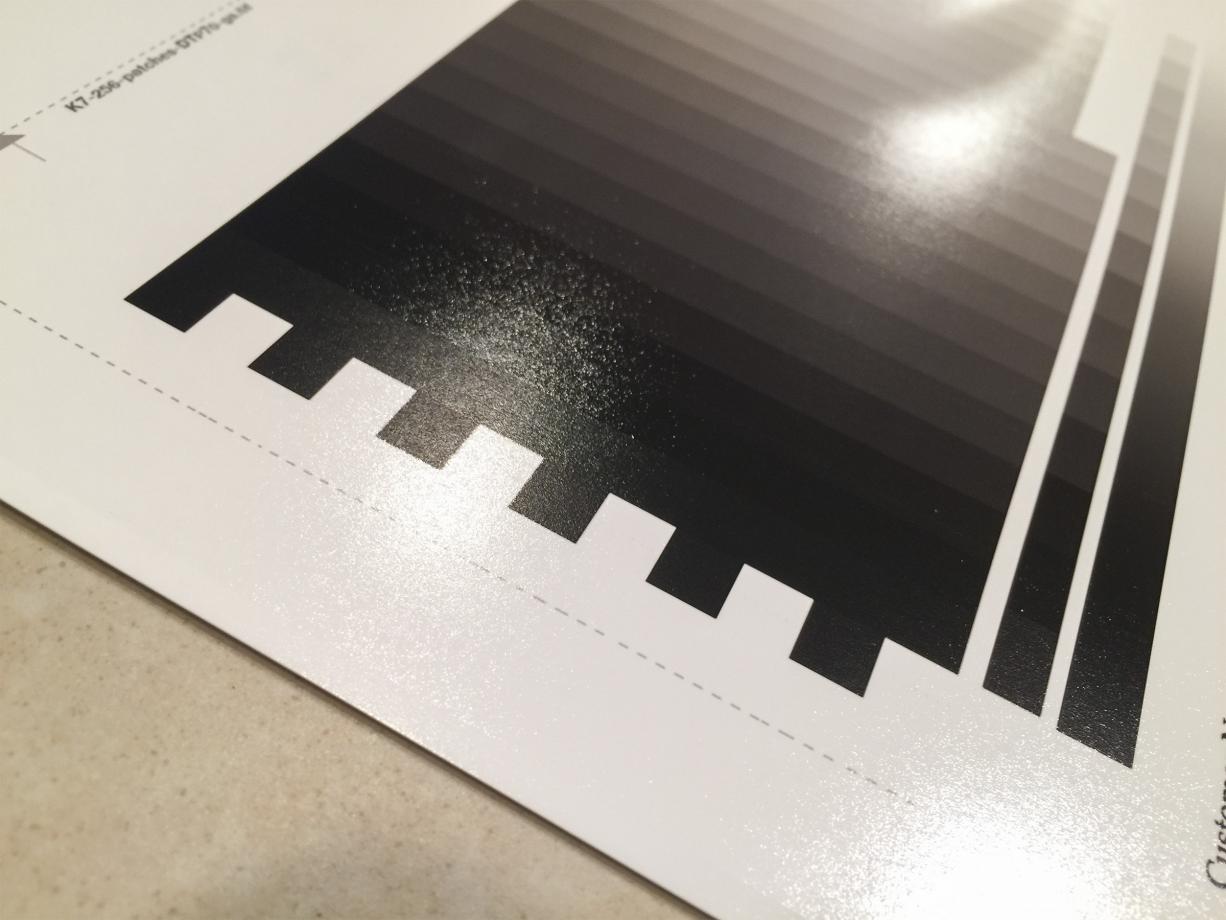 Different papers work differently, and we have noticed some glossy media, including Canson Baryta Photographique require two costs of 30K GO (drying between each layer), or different amounts of GO to provide even gloss.

Sort of a tangent on the GO on glossy.

Someone gave me some commercial prints to spray. Instead of pulling out the spray gun and sundry mess and cleanup, I opted to put them through the printer with the GO in it.

Soon as the first one came out in which I used only 20K of GO for the setting, I noticed the dull and hazy look of the GO on the glossy commercial print so I stopped the rest from continuing. What I got for a L* reading was a 3.834 on a subsequent shot with the same black area, and the GO covered one went up to 6.39. The haze looked odd too and came out with sort of a burple tint (magenta+blue) appearance. I’m not too crazy about feeding it through again as it make make it more hazy and a different tint.

Does the GO change color over time and/or produces a duller finish? I don’t know what printer they came off of, but I will take a hunch and say the person had them done at Costco.

Thanks, and not looking forward to spray-gunning this stuff! Ugh!

We have PRO studios using GO over Epson, Canon and HP color prints. But I do not know of anyone overprinting Costco prints… I would not spray gun GO - rather you should spray gun something made for spray gunning!

Jon, yes I was planning to use “Premier Art Shield” in the gun, not the GO. I believe the Art Shield is a lacquer of some sort, but it sure is thin stuff and about like clear water. Very messy to clean up short of a bath using acetone. I’m surprised the Art Shield quart bottle has lasted for over a year being partially filled/used up since then. I thought it would solidify a bit by now, but it’s still watery.

Back on topic, any ideas as to why the GO covered print drops so much in contrast along with the burple tint? Never would have expected that, but I don’t know what was used to make these commercial prints (Pigment? Dye? Chemical?). Whatever it was, it was a super-glossy black on an RC base and the GO didn’t do it any good (dulled it quite a bit.). I would guess Costco (or wherever they came from) uses a Fuji or perhaps Noritsu printer and whatever is used in those printers. I’ve never used their services.

Not looking forward to spraying the Art Shield either as it takes a respirator to deal with the fumes and wafting over-spray.

GO is incompatible with the type of kiosk printing process that Costco uses. You would be better off with a laminate for Costco prints.

Mack needs this invention by Bill Akinson (as discussed on Lula):