Followup on Epson 4800 printer for conversion to Pro inks

P800 is a great printer. We have a decoder board available for it that is a very elegant solution and we very hopefully that we’ll have chips in the very near future.

It’s a great printer. Equivalent to the 3880 with some of the bugs worked out like the switch leak issue is fixed.

Two week ago, I was on my way to converting my Epson 4800 over, but was having problems getting a cleat print nozzle test.

After changing out the pump, capping station, wiper blade, baffles and also letting it sit for a while, it still wouldn’t clean up, so I took the nuclear option of doing a manual head flush.

That seemed to resolve the majority of the floating jet dropouts, but it introduced a new problem: 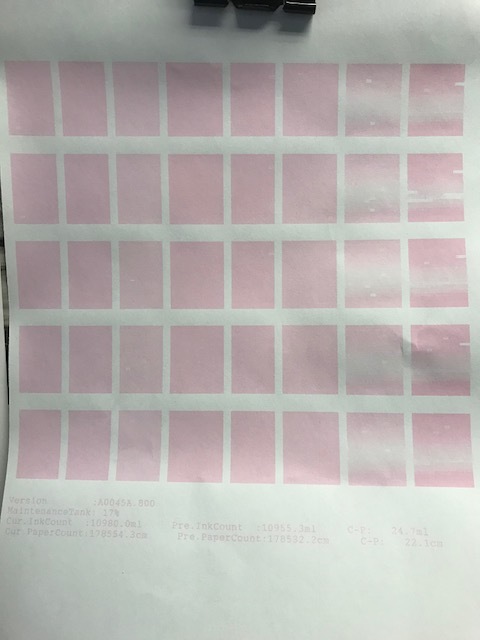 The last two channels are printing faded in the middle. It’s hard to see using the Flush fluid, but it is pretty clearly not right. When I did the manual flush, I noticed that in two of the channels at the opposite end from the serial connectors, when I would push PF into the nozzle, some came out the nozzle to left/right. Since these are supposed to be isolated, I suspect that the gasket between them has failed.

Is it time to declare this print head as deceased or are there any other things I can try?

If it is dead, what model of 17" printer should I be looking for to replace it with? I want to be able to put prints, digital negs, and polymer gravure plate through.

Lastly, I can get a new replacement print head for a pile of money (looks like $800-$1000)… Everything works great on the printer I own and I’m somewhat attached to it, but I’d need to know that I can successfully replace the print head. What is the procedure for replacing a head?

Walker, can the P800 do the polymer plates? I thought Jon may have said that it could not on FB.

I feel like I’ll need to sped $6-700 getting the carts and the chip resetter board up an running, and that is getting close to the cost of a replacement head for the 4800, so I’m not sure what approach makes the most sense. Do you have any information on replacing the print heads on an Epson printer?

OK thanks for the information…

How well is the P800 working for digital negatives? Any issues to speak of ATM?

Lastly, if you go in an add the P800 board and then print 30 cartridges worth of ink, can you then pull the board and run it normally, or does it require a service call at that point?

What I’m getting at is Epson probably won’t touch a P800 with aftermarket inks, and if you have them in there when the printer shuts off for not being able to reset any more, you won’t be able to get it back into factory inks so a tech can do the checkup and reset that it will require.

I don’t think I need an additional ink color from my Pro inks that I already have, correct? I got both the gloss and matte black inks, and the GO, so I have 9 inks here. I think that matches with the 9 cart slots on the P800.

Walker, can the P800 do the polymer plates?

Yes. It does this with front feed perfectly.

Do you have any information on replacing the print heads on an Epson printer?

I don’t think the x800 heads are available anymore sadly. These were the non-tft heads that were quickly replaced with the x880 heads which live a lot longer (more out there).

How well is the P800 working for digital negatives? Any issues to speak of ATM?

Lastly, if you go in an add the P800 board and then print 30 cartridges worth of ink, can you then pull the board and run it normally, or does it require a service call at that point?