I’ve been using Piezography for a year or so now - both on an epson 3880, and a 7880. K7 selenium inks.
I’ve recently been comparing prints to older medium format / largeformat prints of mine - and one thing that struck me is the smoothness of the darkroom prints that I was never able to achieve with piezography.
Obviously the optical prints can yield higher resolution than inkjetprints (looking at them with a loupe is like exploring another universe :D).

What I’ve always struggled with -is the “pebbering”/“graineness” I get in my piezography prints when inspecting them very close. I’ve observed this both on epson 3880 and 7880. I saw it also using the native Epson inks with QTR - seems like its how QTR does things. But was wondering if there is any way to deal with this?

I’ve attached a scan of part of the 51 step chart below. 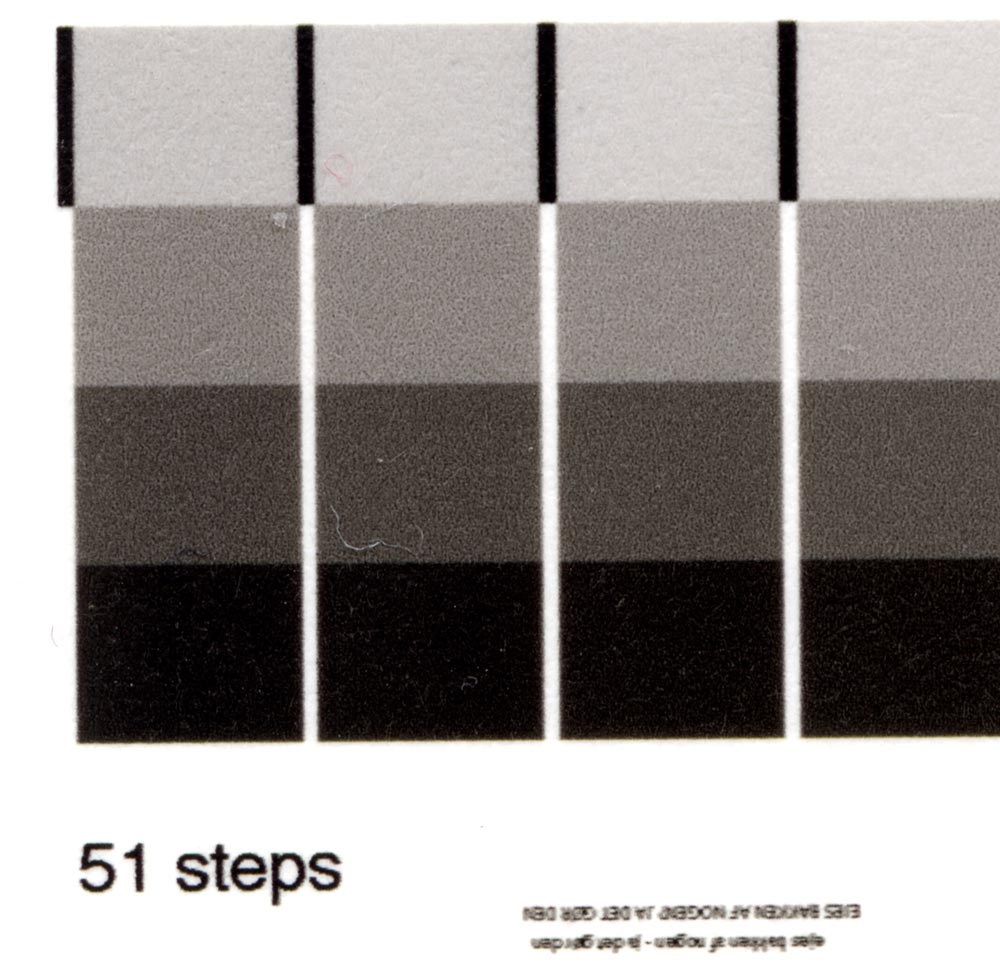 I wrote Walker about this a while back and he said this could be due to high ink load of the older curves. Downloaded and installed the new piezography installer and used some of the curves that comes with that but still seem to have this issue. I print mainly on cone 5 and harman gloss warmtone. Using the later paper the issue is even more apparant due to the glossyness/high resolution nature of that surface.

Any suggestions on how to resolve this? I’ve been considering if profiling/calibrating my setup would help? I was thinking of purchasing a munki spectrometer and the piezography pro software to make my own profiles (is the pro software compatible with the K7 inks or would I need to convert to pro inks?)

I don’t use the 3880 any longer (but as I mentioned I also observed this graineness in QTR on the 3880 with OEM inks - but not with OEM AWB mode).

Through the last year I’ve received curves from inkjetmal (some specific to the SEL K7) and they actually seemed to make the grain stronger. As I mentioned Walker said that it seemed to be an overinking issue that he was working on?

For instance Walker sent me this curve:
http://birkmose.org/7880-SEL-Type5.quad

But it made the pebbering worse - I realised the curves he provided me with had a lot higher ink level for the M and LM channels (shade #4 and #5) at the tones where I saw an increase in pebbering. If I take a step wedge of 51 different grey squares and compare the K value in photoshop, with the ink level in QTR curve viewer I can directly correlate the “pebbering” with those squares which has a K value where the M/LM ink level is much higher in the new curve vs the old (around 20 higher - it hovers around at max 40 in the old curve whereas in the new one it is around 60).

I use the latest print tool version (but also had the issue on the print tool 1 generation). I print from mac os 10.9.

Please try this curve and let me know how your results look in regards to the pebbly surface:
file:///Users/Techsupport/Products/Custom%20Profiles/Piezography/Good%20curves/Glossy%20K7/3800-MPS/3880-CAR-CANbaryta.quad

Is the pebbly surface visible before printing GO, or after GO?

Can you attach the profile?
“Good curves”