I can’t figure out how to get to remove and clean the print head. There are no useful resources about this model anywhere, and the service manual that covers a lot of models is not helping me since it says two screws, which is clearly wrong on this model.

I have removed six screws in total, which is enough for the 9890 model, according to Youtube. It looks very similar to this, but it is not coming off. I have indicated the placement of the screws that are removed now, two with dampers, three blank ones and one black.

In the picture I have removed the black holders for the tubes, and I tried to take off the top tubes, which resulted in expected leakage, but that did not come off either, so I tightened them again. Maybe I am too careful, but I don’t want to force anything into breaking.

Can anyone help me out? 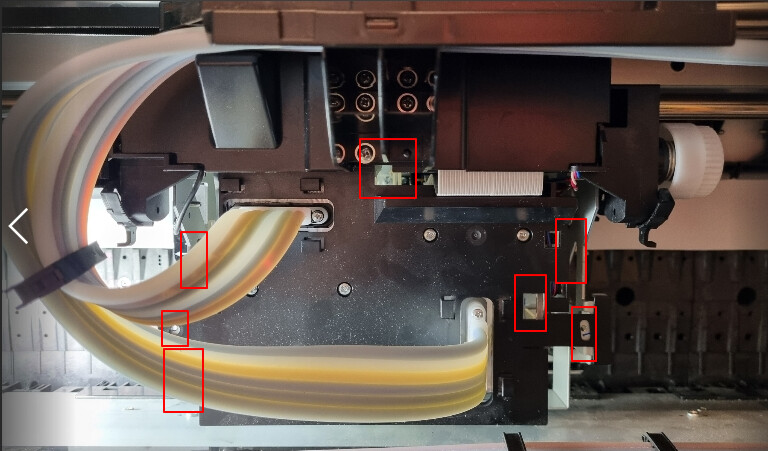 Remove the black cover and there is a middle screw to remove as well.
-Walker

Can’t believe I overlooked that screw. It’s made available so removal of the black cover isn’t even necessary.

Now I have removed the head, and it’s sitting above a bath of cleaning fluid covered in plastic so the fumes can’t escape too easy. The middle channels, which I presume are the magentas, were totally blank, I don’t think they’ever been used after first initialization.

I also tried pulling the magenta tube with the syringe, and the air bubbles are moving. This looks promising so far.