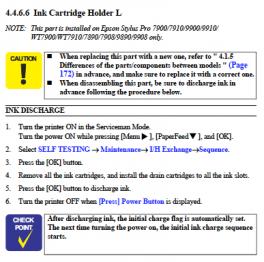 These cartridges are special carts that epson techs have.

Basically they are cartridges without ink-bags or internal dampers. They depress (open) the inlet spikes in the printer bay to allow air into the lines. Then the printer does an “initial fill” but instead of with ink it’s just air. This ejects the ink from the system. This is a dangerous procedure that should only be done after a full purge with PiezoFlush or actual Epson Cleaning Solution that is really only available in the factor. It’s done when “re-furbishing” an Epson printer for re-package and re-sale on the refurb site.

In the past (in my own labs that I’ve run) I would take a color printer, fill with PiezoFlush, let that sit for 24 hrs, then put Epson carts in that I had modified to not have ink bags, then I would do this ink eject procedure to get rid of the red PiezoFlush, and then I would init-fill with Piezography ink. In my mind, this would eliminate any small excess red that was present from the PiezoFlush after the Piezography ink was in the system.

@walkerblackwell, the epson service manual says to do this when replacing ink selectors, ink tubes, or printheads, not just for refurbishing. I’m guessing when doing those tasks it doesn’t follow a cleaning fluid because it’s only for a short duration while a part exchange is taking place?

Can you clarify what inkjetmall’s practice is when exchanging an ink selector? I’ve seen Dana elsewhere state that the lines need to be drained, so I’m presuming you guys use either drain cartridges or modified epson carts to do so? Or is there another method I can use (that doesn’t involve purchasing yet another set of carts!)?

Another question: you said

I would do this ink eject procedure to get rid of the red PiezoFlush, and then I would init-fill with Piezography ink. In my mind, this would eliminate any small excess red that was present from the PiezoFlush after the Piezography ink was in the system.

Although I could not visually detect any pink tinge in the other inks, I’m guessing they must also have a similar proportion of contamination with piezoflush (although masked by the density of the pigment, I’m wondering if that will still affect the neutrality?). I don’t remember seeing anything in the manual about piezoflush in the lines contaminating the incoming inks when an init fill is done.

Is it normal practice to have to do more than one init fill in order to get the piezography inks neutral, or is mine an isolated case (potentially affected by dampers in poor condition?)

It takes generally 2 init fills to get the GCO/PF completely gone but this wastes other ink. I suggest running a 24x90 inch flush print (use the flush images in calibration mode) on some cheap bond paper.