Hi, I purchased the magenta cartridge with piezo flush for my 7900, did the initial charge and did a nozzle check (someone I spoke with at IM advised that) and saw that the display was similar to the magenta, but a bit lighter. No difference after 48 hours. After a bunch of regular cleanings with a teeny change that can only be seen under a magnifying glass, I did a sonic cleaning and now the nozzle check shows a much lighter display, but no added lines. I am letting it sit for another 48 hours as maybe the flush didn’t originally get to the head. The nozzle display is extremely light.
What should the next step be?
All this happened after I tried the windex paper towel cleaning. Before that the magenta was fine; I was trying to fix the yellow. The magenta nozzle check now shows 2 large sections of lines missing near the middle.
Another question- I have orders for b&W prints. Can I print them with the flush in the magenta as maybe the advanced B&W only uses the 3 blacks?
Thanks,

If the lines are out from the middle of the head, this is most likely a burned out channel (magenta). Sadly, ABW mode uses the magenta ink channel to neutralized the warm epson black inks. An alternative to using ABW would be to use QuadtoneRIP. You would have to fully read the documentation and then x-out the Magenta channel entirely (by default QTR does use the magenta channel but you can tell it not to).

Thanks. I am still curious to know if the latest much lighter nozzle check means that the flush is newly in the channel. That gives me hope. I cannot do another initial charge until I get more ink. Wouldn’t that be the next step? Would it hurt to do another nozzle check in the meantime? Hope springs eternal.

The flush has made it through the head. Yes, sorry for note mentioning that.

That was indicating to me that the nozzles are burned and not clogged. generally PF will unclog almost entirely dried heads in a 48hr period (at least most of the nozzles) but if it’s getting worse, it is most likely burned nozzles.

Thanks, I will cling to a bit of hope until I do the next initial charge.
Gail

Before I plunk down 2K for a new printer, do you think it pays to try the initial charge one more time? I didn’t do the 2nd initial charge because I needed to order more LK ink to do it and I was tired of wasting more money on ink. Here is the nozzle check that has been constant. Is it consistent with a burned out head? If I get a new printer the ink I have left is no good to me anyway.
Also, are there instructions for any last ditch effort to flood the other parts of the machine with piezo.

I think I brought this on myself with the overly wet windex & paper towel method when I was trying to clear the yellow which I was living with for a while anyway. I would like to warn others about it.

Thanks once more.
Gail 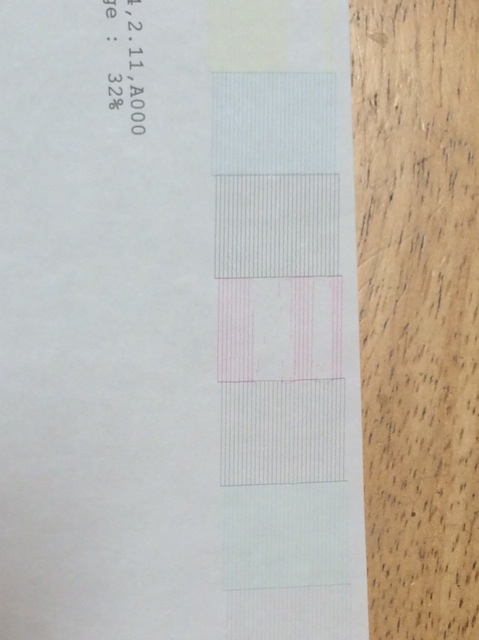 The head is dead. Long live the head.

(tell-tail delayed fire in the channel with PiezoFlush).

Thanks for the final verdict.

I developed a work around until I get another printer. On large sepia prints, I can avoid the banding by printing in 2880. The odd thing is that the prints are too magenta. As it is the magenta that is half gone, why would that happen?