Several months back I had an issue with older cartridges that had leaked and caused me a good amount of concern. The forum’s moderators proved incredibly helpful and I was walked me through the steps necessary to resolve the issue.

I’m facing a new dilemna however and I’m unsure wether or not it’s related.

I’m aware of the common clogging problems that plague Epsons and, up until this point, I’ve used information found throughout these forums to great success.

A couple weeks ago, I found a section of clogged Vivid Light Magenta nozzles on a nozzle check. I attempted to fix the clog using the steps I have in the past. After a day or two of no progress I took a closer look at the test print out and noticed something that has me worried. In the photo I’m attaching,
you should be able to see that there is a “drift” that occurs, in-line with the misfiring nozzles. I haven’t been able to find any other similar occurrences. Does this look as if damage has occurred or, (fingers crossed) a need for serious alignment?

Thanks in advance,
Kyle 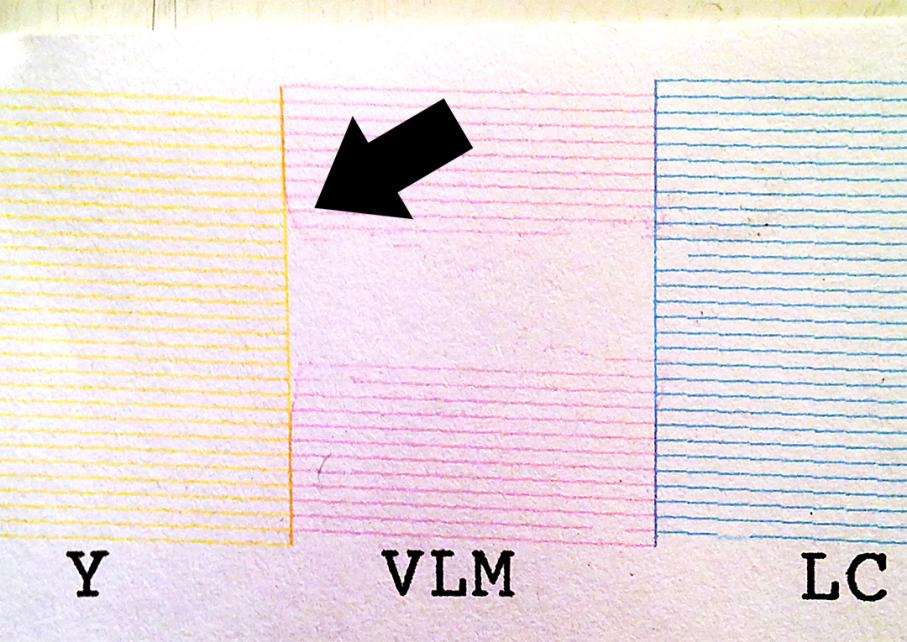 This could be caused my the misfiring nozzles, the large missing section of the nozzle check is certainly not caused by alignment issues. so unless you can get your nozzle check back to where it should be, you really won’t be able to determine if it’s either missing nozzles or alignment. Although my instincts tell me it’s the large amount of missing nozzles.

What exactly have you done to try and resolve this problem?

I suppose that wishing this was an alignment issue was somewhat foolish. :roll eyes:

I’ve had the most success clearing clogged nozzles in the past by using the ol’ unplug the printer and pull the printhead over a lint free cloth saturated in gentle surfactant method. I’ll usually do a cursory clean of the wiper blade and pump & cap assembly at this point as well.

I’ve had the most success going straight to performing a single power clean at this point. (I feel that the nature of this clean might be better suited for pulling any dried pigment that may have been culprit?) Then, after a nozzle check, I’ll print from an ink separation file until all’s flowing well again. This has always done the trick up until now.

My concern still lies with those vertical straying lines because of their alignment to the missing section. This may directly correspond to whatever problem is causing dropout only, I’ve never seen missing nozzles cause anything like this before. Moreover, these errant vertical lines don’t seem to be affected by the cleanings. They look identical in each nozzle check as far as I can tell.

Should I attempt a more aggressive cleaning?

Your assistance is very much appreciated Kelly.