Print out of Image: 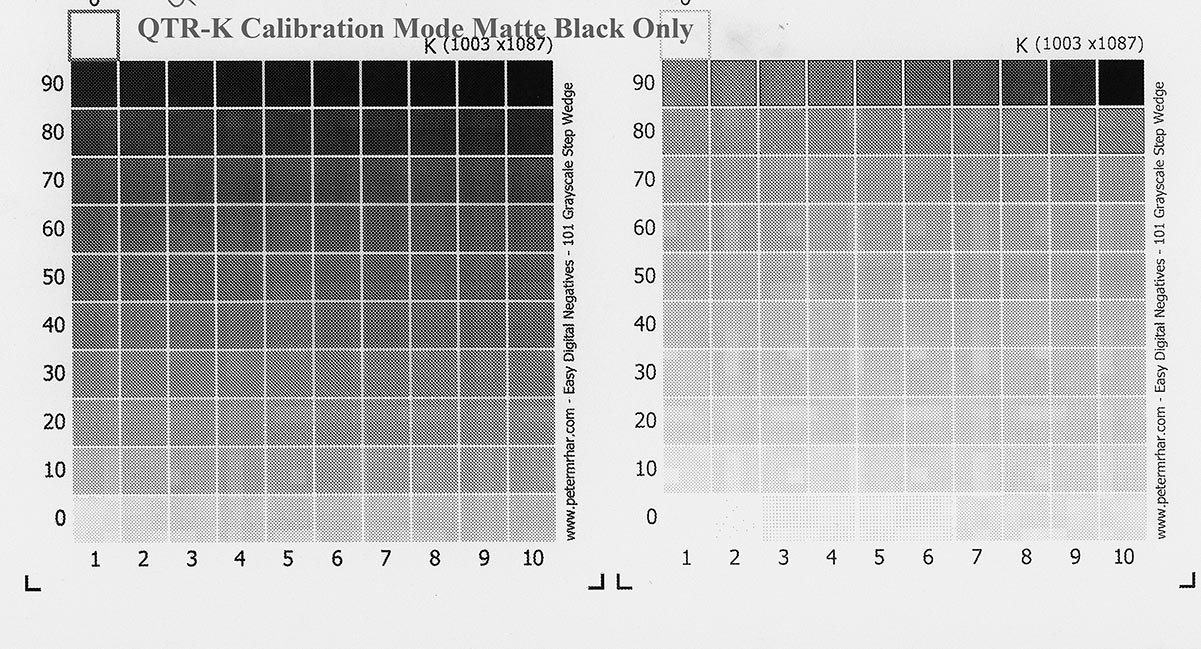 However, when I printed out the image in QTR 16 Bit (without added Calibration Mode color) most of banding seemed to disappear: 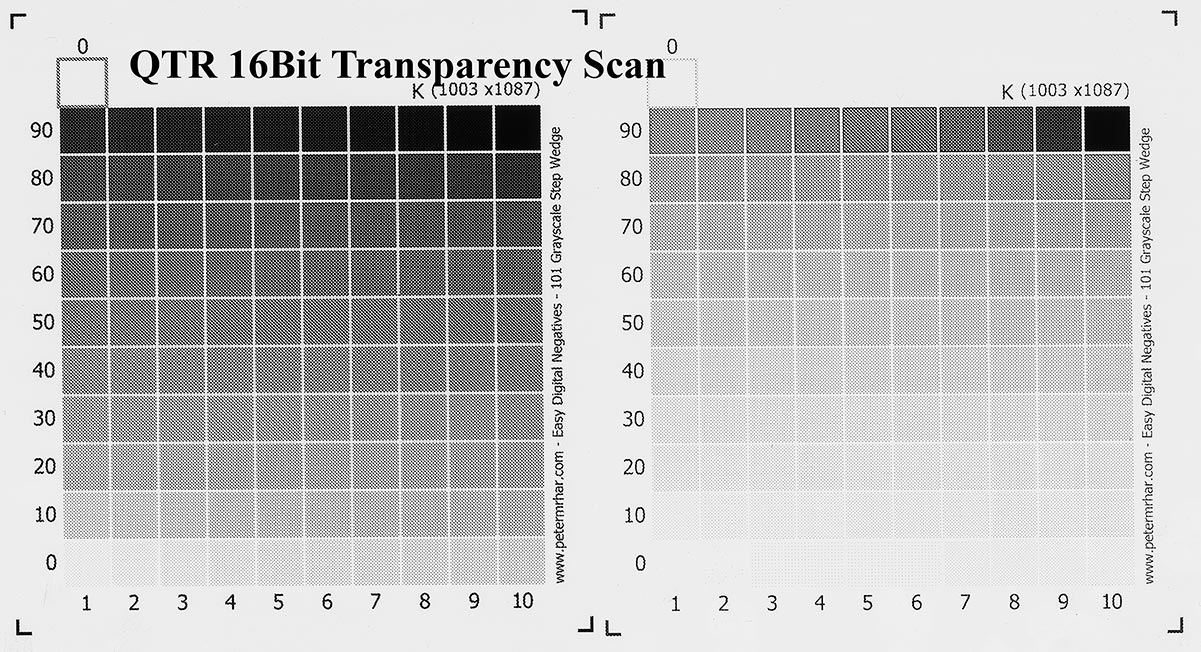 PiezoDN/QuadtoneRIP is not built for screenprint transparencies as I have discussed in other threads (in the proper forum at forums.piezography.com)

op and bottom of transparency and 1/2"on sides.

This is a well documented issue with QuadtoneRIP. Just use larger film or tap a 2" paper leader and trailer to the film.

most of banding seemed to disappear:

This is because you are using more than 1 channel of ink.

How do I print from only the K-Matte Black Channel?

Calibration mode. But then you get banding. Again, (as previously stated in other threads, QTR is not built for screen printing

I know PiezoDN negatives uses Photo Black and Gloss are there any problems with printing with Matte ink on transparencies?

Yes. MK ink rubs off and is not built for film. Use our UV45 ink: This is built for screenprint film.

What image resolution do you recommend for printing for either positives or PiezoDN negatives? 360ppi is normally written of as highest visible resolution, does it hurt to printer at higher ppi such as 600ppi?

720ppi for continuous tone images. Screenprinting is different. It uses a halftone.

Read the manual. Set your photoshop to Gray Gamma 2.2

Should I leave file as RGB (aleit it one with no color data) when I open it in Print Tool? This way it will still display color space as Adobe RGB.

You recommended PrintFab for halftones but I can convert files to halftone in Photoshop and through Printfab i got less dense negatives. Is there a way I can print these pre-halftoned images through Print Tool?

Print tool can take halftone raster images (720ppi or higher though) but the driver (QuadtoneRIP or PrintFab) is the thing that needs to be figured out here. As previously stated PrintFab is actually built to make the screenprint halftones correctly so I suggest that. You can download a trial for 30 days.

Let me be very clear: PiezoDN is not (nor ever was) built as a screenprint positive solution. Nor is QuadtoneRIP, UltraHD-MK or HD-PK ink. You are using 4 products (PiezoDN, QTR, MK, PK) that are not built for screenprinting and you are trying to do screenprinting with them. UV45 and PrintFab however, are built for screen-printing film production.

Thank you getting back to me. Yes I am aware that this not the normal workflow for printing positive transparencies. As I previously explained but in previous posting I guess, I will primarily be using my R3000 printer and PiezoDN/P2 inkset for printing digital negatives for platinum printing. As I do not have the money/space for a separate printer and ink set for printing screen transparencies, I am trying to find the best method of printing with my current setup although I know it is not how one would ideally setup ones system for screen printing.

I spoke about this issue with Wells and Jon Cone before purchasing my PiezoDN/P2 inks and they told me there would be a way to print screen transparencies with this ink set as well. Given this information could you tell me:

I would greatly appreciate your advice.

Given my PiezoDN/P2 ink set, should I try and print only from the Yellow Cartridge (in which is installed Piezography High Density Photo Black)?

Could I fill my unused Photo Black Piezography Cartridge with UV45 ink and install it into my printer?

Yep. This would be ideal and then your printer would be able to do both PtPd and Screenprint film with ease.

Thank you for getting back to me so quickly.

Sorry if I’m belaboring the point but want to make sure I don’t make a mistake and mess up my R3000 for PiezoDN printing.

As per my last post, I currently have PiezoDN/P2 installed on my R3000 printer for printing PtPd negatives. I also want to occasionally print positives for screen printing. I proposed putting UV45 ink (Inkjetmall’s ink for screen printing) in the empty Piezography PK cartridge and then printing single channel only using PrintFab to print only through this PK (UV45) cartridge. You said this would work and be a way to print both PtPd negatives and screenprint positives from same printer.

I appreciate your time and advice.

Would installing UV45 ink in the Piezography PK Cartridge in any way interfere with printing PiezoDN transparencies?

Excuse my ignorance on printer lines and print heads, but would doing Head Cleanings with UV45 installed in PK Cartridge or Changing the Black Ink through my printer menu from Matte Black to Photo Black in any way contaminate the print head with UV45 ink when I later print PtPd negatives using PiezoDN/P2 inks?

If I do put UV45 in the Piezography PK Cartridge for printing screenprint transparencies, is Pictorico Ultra Premium OHP film still the best film to use for UV45 ink?

I have PiezoDN/ P2 ink loaded in my R3000 printer. I purchased UV45 which i will load in the one empty cartridge, the PK Black cartridge, for printing screen printing transparencies using PrintFab per your suggestions.

I have already flushed the other channels using QTR flush images in Calibration mode. While I have done several cleanings with the PK Black channel activated, what method should I use to flush any remaining Piezo flush from PK channel? Should i use QTR flush K- black in Calibration mode or just a solid black image through PrintFab with only black channel active? Does it make a difference?

If i want to do print test with UV45 ink, can I do test print on standard paper or photo paper?

Should i use QTR flush K- black in Calibration mode or just a solid black image through PrintFab with only black channel active? Does it make a difference?

If you are using the QTR flush image it will ONLY work through QTR and with QTR in calibration. Do as the instructions say to do (Flush image + QTR in Calibration mode).

If i want to do print test with UV45 ink, can I do test print on standard paper or photo paper?

TEST ON FILM! That’s what it is built for. How will you know anything about it if you test it on media it’s not builtfor?

Thanks for getting back to me.

Just wanted to know if i could do QTR flush on paper or photo paper with UV 45 in PK channel to save pictorico ohp which is more expensive and I’m running out of it? Just trying to clear channel.

How many QTR flushes of PK channel do you recommend? Its already had piezo flush through channel during multiple head cleanings and was printing very faint pink last nozzle check.

By test i just meant test to compare halftones created through PrintFab and through AccuRip I have trials of both Im trying to decide which to buy. It would just be image test of halftones not density test. Again just wanted to save pictorico film as print wont be used either way. Guess could also try test of halftones through MK Black channel which has piezography Ultra HD Matte Black ink on paper.

You can do this on letter paper (not need for any expensive paper). For testing though, use the correct media.

By test i just meant test to compare halftones created through PrintFab and through AccuRip I have trials of both Im trying to decide which to buy. It would just be image test of halftones not density test. Again just wanted to save pictorico film as print wont be used either way. Guess could also try test of halftones through MK Black channel which has piezography Ultra HD Matte Black ink on paper.

Use film. Other media bleeds differently.

Ok. Thanks for clarification.

How many QTR-k flushes of PK channel with UV45 installed would you recommend? In theory until theres no pink stain but I never really saw pink stain when I flushed other channels?

How many QTR-k flushes of PK channel with UV45 installed would you recommend? In theory until theres no pink stain but I never really saw pink stain when I flushed other channels?

Im printing transparencies for screen printing from the Photo Black channel of my R3000 printer with UV45 ink on Pictorico OHP.

Do you think it matters if I use Ultra Premium or just Premium for these positive transparencies i know you recommend Ultra for PiezoDN. Not sure if it matters for this?

In the other ink cartridgeson my R3000 I have already successfully installed P2/ PiezoDN ink which Im going to start trying using for printing digital negatives with PiezoDN. I know some people have problems with pizza wheels on negatives. Is there an image test you would recommend to make sure pizza wheels don’t appear? Are there certain images in which they’re more apparent? I haven’t seen them yet but have mostly been printing halftones or in paper. I previously had problems when i previously tried to make digital negatives on other printers. Should I just buy 13” roll of Pictorico Ultra Premium transparency film to avoid pizza wheels? If possible would prefer to use sheets for ease of use but if there are pizza wheels would prefer to avoid having to do other modifications to the printer. One of reasons I got the R3000 was it has roll feed in case sheet feed produced pizza wheels.

I would appreciate your thoughts or suggestions.

Sorry I remembered one other questioned.

I previously asked for your advice for print driver for printing screen print transparencies. This was more relevant when I was trying to print from Yellow Channel which had Piezography Photo Black. I have since loaded UV45 into the Photo black cartridge. Would you still recommend using another printer driver? Im planning on buying AccuRip eventually as it does produce better quality halftones but will wait as its quite expensive. PrintFab (which you recommended) is also quite good but the halftone features are only available in pro version which is $150 and the halftones seem the same as halftones created in Photoshop and I don’t mind doing bitmap conversion myself.

Would you still recommend Gutenprint for printing pre-halftoned transparencies? Is there a way to print directly through Photoshop or Print Tool and make sure its printing only through the Photo Black Channel. Do they provide ways to vary ink density?

Would appreciate your recommendations.