Hi Walker and other members of the forum,

I come back with the continuation to the soap opera that has been going on with my printer.
If you remember on my last post, I mentioned the problems I have been having with my 9900 since an Epson technician changed the whole cleaning unit and the dampers unit. The printer was working fine before that.
Right after changing these pieces, I loaded the machine with a new set of carts filled with piezoflush. Right after, as I made the first init fill, a colour channel totally disappeared. As new power cleans, init fills were made, more colours started experiencing the same problems.
Following Walker’s suggestions, I filled the carts with piezoflush up to the top (to pressurize the carts fully) and made another init fill. No changes.
It is important to mention that some colours disappeared completely, 2 or 3 remained always good, and the rest were coming and going, intermittently. On one iteration one colour could be fully off (0% nozzles firing) and on the next power cleaning the colour was almost fully on (90 to 100% nozzles firing).
The main assumption was a defective cleaning station that was introducing air into the system.

Today, the technician came and he changed both the cleaning station for a new one, AND also the whole dampers unit. Then performed a few cleanings: results were the same, many colours missing and “jumping” nozzles on-and-off.

We then decided to see whether the carts I had been using for Piezoflush were defective… He installed a whole set of Epson inks (the carts were not full, but enough to perform 2 init fills). After the init fills, the results were the same (please see position 1 on the image attached to this post).

The technician came to the conclusion that, even if many misrifing nozzles seem to come alive and die again, the only explanation was a head malfunction. Because I was using not Epson inks, they could not cover the repair of the head, and therefore he walked away leaving me with a bill of 1000 usd and a monster paper weight in the form of a malfunctioning 9900.

What I did when he left was filling again my carts with piezoflush, topping them up completely, resetting them until they all read full, and making another init fill. When I performed the nozzle test, 6 colour channels were firing at 100%. In fact, 2 colours went from 5% nozzles firing to 100%. 4 colours still remained with 0 to 2% nozzles firing. Then I performed a power cleaning, and then 2 of those newly recovered colours saw again a number of nozzles misfiring.

You will find an image showing these three nozzle tests here: 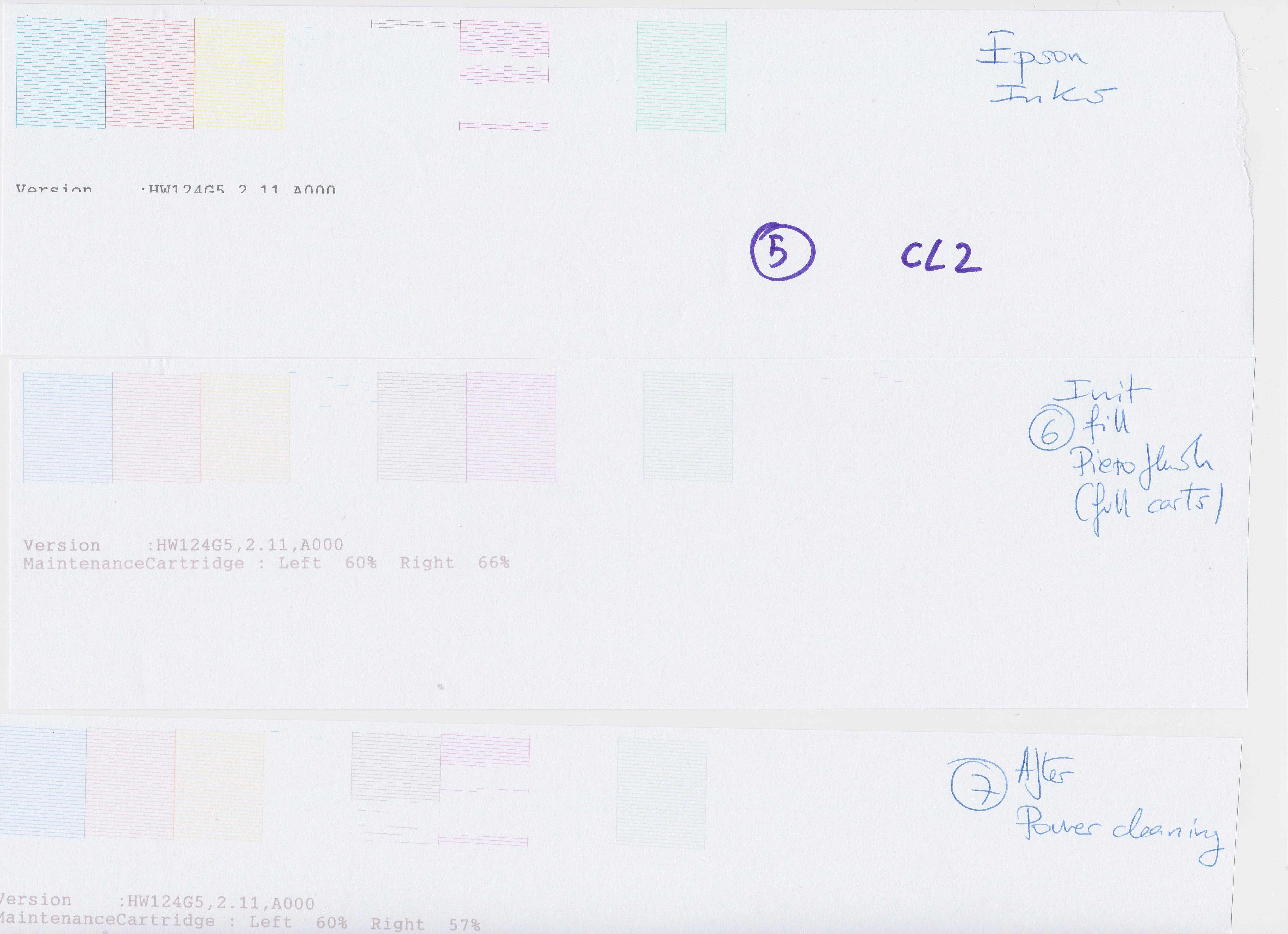 At this point, I do not have any idea of whether:

I was right now starting my printing session for the summer, and was about to order new piezo inks for the 9900… I really want to solve this problem, if possible, before proceeding to ordering new inks. Otherwise, I might have to switch to my 9880 that I had as a backup.

Thanks so much in advance Walker.

I hate (love) printers too.

It’s the head IMO. But I’ve seen this with (about 10?) epson printers I’ve owned + OEM inks so it’s nothing to do with non-oem vs oem. It’s a problem with 9900 heads that crap out due to damper/cleaning assemblies.

I struggled with a similar problem on my 7880 until I finally decided to replace the print head after replacing all eight ink tank valve assemblies, the pump capping assembly, and the damper assembly unit. If you search long enough you can find new printheads in Indonesia for about half the cost of one from China or the US. Here’s a link to one for the 9900 I found there for $754 – normally around $1600: http://inkjetprinterhead.com/index.php?id_product=13&controller=product&id_lang=1

Hi Walker. Thanks for the quick answer… I really need to make a decision on what to do with this printer in order to gear up for this summer printing session… Can you please elaborate a bit more on these points?:

Is it normal that nozzles come back and go if the head is damaged?

Not exactly on this model. Normally if the head is damaged the nozzles are gone forever.

What I do not understand is whether this problem might have been due to physical damage to the head by a faulty cleaning unit?

Both or either. It can be a mystery with this type of printer sometimes. It could easily also be o-rings that are miss-aligned anywhere from the ink bays to the cleaning assembly.

At this point, is there anything you would do still in order to try to save the situation?

There’s a chance your head is fine. In this type of a situation I will often take a freebie 9900 from a friend (with a channel that is certainly dead) and take my head out and put it into the freebie. This changes all the variables from your old 99 except the head. I’ve successfully gotten back into production this way. That said, there’s a strong chance that at least 1 or 2 channels on 99 are actually damaged inside of the head from all of this work.

Do you think it would be beneficial if I pay for phone consulting with you or Dana in order to discuss about this? I have invested so much time, energy, money and sweat on this machine … and I need to make a decision for this summer. I would also like to talk about the options if I revert to 9880 in terms of inks you recommend for digital negs… taking into account the new driver, new inks, etc…

Doing a phone consult will not change a thing. We do not have secret information that we only keep in our mouths. Also we warn people about this printer. It can be a gremlin regardless of ink or cartridges used, but Piezo has been the best acting in this printer for years and years.

I don’t think they can do that “it was 3rd party inks so the head is not covered” anymore. If it was under some kind of warranty then call Epson and bitch. Jon and Walker would know better.

Just as Mark said. Warrantied printers should have their heads replaced as default any time they have a problem with nozzles. The fact that they did not do this is a problem. We keep our printers under extended warranties and replaced our heads (under warranty) after about 3 yrs when their was the slightest sign of issue. We are now in 4th year and have several years ahead on these heads.

Today I decided to give it a last shot to the printer, making another init fill with piezoflush after having left the piezoflush during 3 days inside the whole system. Really strange… before the init fill the printer showed 4 channels printing at 100%. Just after the init fill, two of those 4 channels just disappeared completely, not printing a single nozzle. This is what has been happening from the beginning… disappearing nozzles from one cleaning-init fill to the next, just like that. What is really strange is that the pump - cleaning station and dampers were changed for the second time now… so the problem seems to lie somewhere else. I do not think the head is too much the culprit, since it seems weird that all of a sudden lots of nozzles just disappear and then some come back at once the same way they left. There are some channels however that do not move and are totally blank however…

This is really weird.