Hey guys, I have the inevitible 4900 blues… Printer was free with dead cyan channel.

I replaced the capping station and selector unit in september, but it didn’t cure it entirely like I’ve been able to in the past-- the cleanings are never as effective as they should be. color printing was mostly ok (was just printing color images for a while while waiting to afford piezo ink, printing stuff without a lot of cyan, and the printer was actually working very well for the most part). It did always complain when switching MK/PK (needed several cleanings to get a good nozzle check, but other channels never clogged much)

I just replaced the LC/VM/VLM/LK/LLK/PK/MK with the piezo selenium set, and it’s been very unhappy. I did forget to prime the carts, but a power cleaning and some QTR Calibration patch printing and the ink was in the head. had some air in the line, so it did print blank for a minute or two before I caught it. Been running one power cleaning every day for the last 3 days, but it usually just makes it worse.

The “decompression pump” on the side seems to be sucking and blowing ok (felt with finger as it started up). Cleanings are pulling ink through…

Here’s a video of a power cleaning on the VM/C channel. doesn’t seem like there’s back-flow. See nozzle check patterns for before and after… Shocker: It’s worse. 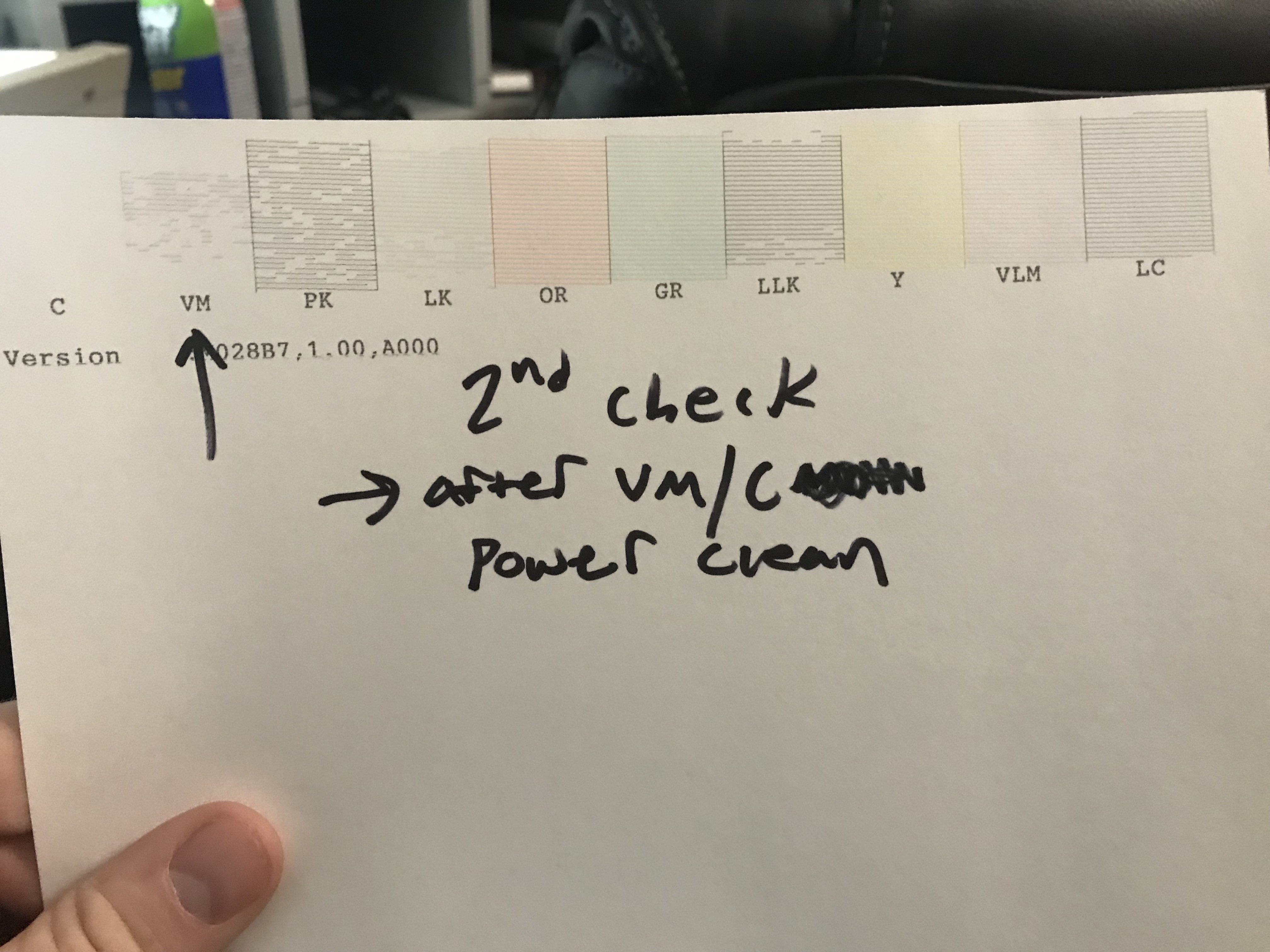 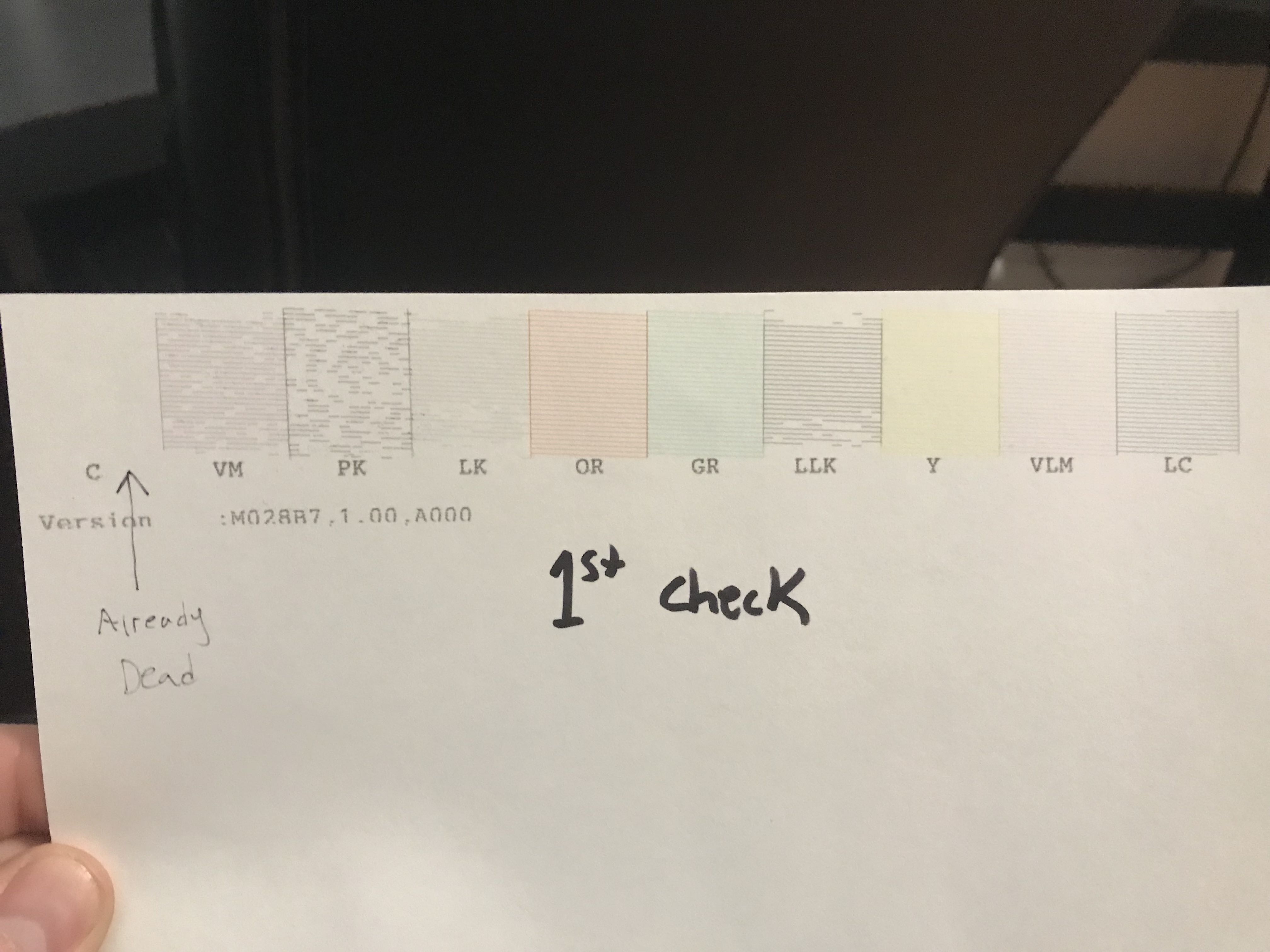 I’ve fixed many 4900s before, and I was very careful with this installation, seating the selector unit center first, then progressively tightening apposing screws til all were snug. Any help appreciated.

I assume you have removed the orange tabs from the carts themselves? These have to be removed.

This is an unpressurized printer (the reason why it’s so flaky) and the peristaltic pump is weak as all hell. But what is really the problem is your selector unit. Most likely the screws are torqued too low or too high and you have stripped a thread or two. They are metal screws that go into plastic threads. It’s an engineering mess-up. Air is getting in there.

Hey Walker, thanks for the quick reply, I don’t know how you’re able to juggle all of the amazing things you’re doing and customer support at the same time-- but thanks!

Yeah, orange tabs are out… curious though- why are they there if they just get taken out? also, when you say “non-new 4900s” do you mean that they fixed issues in later issue 4900s (is there a serial number denomination that indicates new/old models?) or you mean you just stay away from any used 4900s? I’ll try reseating the selector. Does the capping station cleaning cycle look ok?

Also, does the black top plastic piece over the selector unit actually help to seat it or it’s just an aesthetic cover? I just left it off after I replaced selector.

or you mean you just stay away from any used 4900s?

Making an odd noise TBH. But because it’s only sucking one tube I feel like it’s not looking right. But my memory is a bit foggy on this printer in that specific regard.

Also, does the black top plastic piece over the selector unit actually help to seat it or it’s just an aesthetic cover? I just left it off after I replaced selector.

No need to put it on in this case.

Thank you so much for all your help! I’ll reseat it and see where I’m at. Pretty sure nothing is stripped- wasn’t cranking on the screws too hard - but good to know they shouldnt be too tight either… stay tuned, any fellow 4900 sufferers!